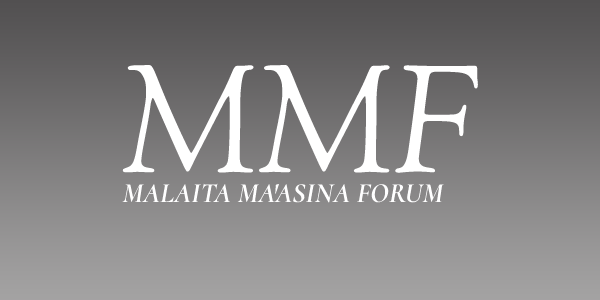 THE Malaita Ma’asina Forum (MMF), fed by falsehood and misinformation on the security pact Solomon Islands signed with China, is repeating its call on Manasseh Sogavare to step down as Prime Minister.

“The reasons for this call are based on the Preamble of the National Constitution which says Solomon Islands is owned by Solomon Islanders.

“We believe that the process of getting to the Governor General was not followed based on section 32 of the National Constitution.

“Our freedom in section 12, 13, and 14 of the constitution is (under) threat if China comes in with weapons. … Section 7 of the Constitution does not allow any person to torture or cause in-humane treatment to any person

Section 49 and 50 of the Constitution does not allow the Prime Minister and his Cabinet to sell the sovereignty and democratic government to a foreign country,” MMF President William Gua said in a statement yesterday.

Mr. Gua said those who signed for the security pact (have breached) the Constitution and should be sacked from Parliament.

Solomon Islands’ action on the security agreement is a no care attitude to USA, Australia, New Zealand and other Pacific countries.

“We therefore call on the Prime Minister to step down for the sake of the nation and to continue to live in peace.

Mr. Gua said the November riots were a clear reflection of the attitude of leaders and we should not call on outsiders to settle our internal problem.

“From last November’s riots, it is obvious, current security agreement with Australia is inadequate to deal with our hard internal threats. The economic impact of the November Riots has nearly crippled Solomon Islands,” he said.

“A stable Solomon Islands is important for a stable Pacific,” he said.

“Solomon Islands does not subscribe to the view that only a partner or partners of the same ideology is able to do that,” Prime Minister Sogavare said in a published statement.

“Internally, the consequences of last November riots were around $800 million. 1, 000 jobs were lost and many more livelihoods of our people affected.

“The tendency of having to frequently deal with riots leaves the government no option but to enter into security agreement with other countries.

Mr Sogavare said Solomon Islands is negotiating security pacts with Fiji and Papua New Guinea, similar to the one it signed with China.