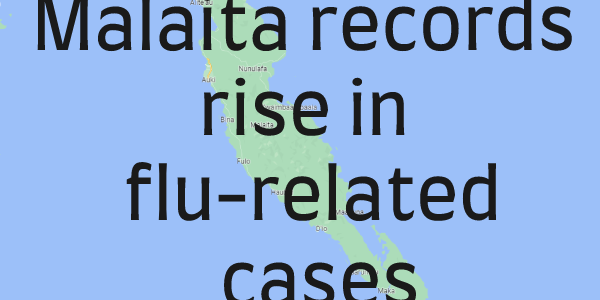 CLINICS in Malaita Province have recorded a high number of flu-related cases over the past weeks.

Flu has reportedly spread throughout the communities and schools in the province forcing few schools to temporally suspend their last week.

Laugwata and Aligegeo schools in Malaita are the latest victims of the flu virus.

Deputy Head Teacher of Laugwata Primary school in West Kwara’ae, Michael Misitana said his students have had bad experiences of the flu attacks.

He said there has been an increase in flu cases at the school, forcing the board and administration to suspend classes.

This suspension was basically aimed at controlling the spread of the flu virus at the school and nearby communities.

Laugwata School Board Chairman, John Liu, confirmed there was a flu outbreak at the school.

He said since most of students and teachers have been infected by the flu virus, they decided to suspend classes until Tuesday next week.

“This decision was made to allow parents to take their children to clinic for checkup,” Mr Liu said.

Director of Malaita Province Health Authority, Dr Rex Maukera, confirmed that a high number of flu- related cases were recorded in the province.

However, he said the current flu outbreak is not Covid-19.

Dr Maukera encouraged people to follow medical advices as well as to visit clinics to check for malaria.