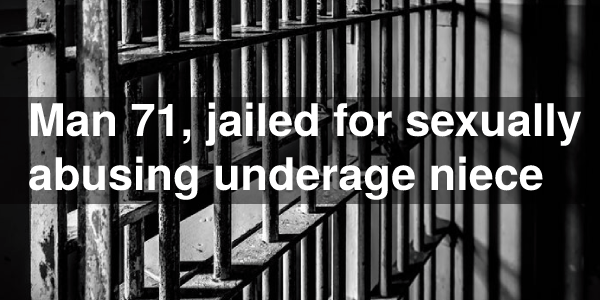 A 71 YEAR-OLD man was sentenced on Friday to three (3) years in prison for sexually molesting his under-aged niece in 2018 at a village in Marau, East Guadalcanal.

The man who cannot be named to protect his niece’s identity had pleaded guilty to one count of having sexual intercourse with a child under 15.

The defendant was 67 years of age and the complainant was 12 years old at the time of the offending.

Justice Maelyn Bird during the sentencing told the defendant that he was at the ripe old age of 67 years and he had allowed himself to stoop very low and committed the offending.

“I am informed you are the complainant’s uncle,” Justice Bird told the defendant.

“In Solomon Islands Culture, you are regarded as the complainant’s father and that has placed you in the position of trust.

“You have breached that trust placed upon you.

“At your age, you are not the type of person that could be trusted with young females,” she added.

Justice Bird said from the facts, it was clear the complainant came into the defendant’s house to feed him and he had turned around and sexually molested her right inside his home.

She said told the defendant that being his niece his home is supposed to have been a safe and secure place for the complainant to be in.

She further stated that the defendant had turned his home into a crime scene.

“It is a disgrace that you have molested your very own niece right inside your home.

“The complainant was below the consenting age and you her very uncle had robbed of her innocence.”

The maximum penalty for this offence is life imprisonment.

Justice Bird said the court has noted that this type of offending is very prevalent in our country and the courts are very concern about that prevalence.

She said that in any event the sentence that the court will impose on each case would depend on the peculiars circumstances of each offending.

“The maximum sentence would necessarily be reserved for the most serious of cases.

“Section 24 (2) of the penal code cap 26 empowers the court to impose a shorter sentence than the maximum sentence,” she said.

For this matter the court heard that a reconciliation ceremony witnessed by elders and chiefs at their area was held after the incident.

During the ceremony two strings of shell money and $350 was given to the complainant’s family by the defendant’s family.

The court also gave credit for the defendant’s guilty plea, that he has no previous conviction and he cooperate well with police during the investigate.

The court further considered the compensation paid to the complainant’s family, the defendant’s health issues which are controlled by medication and that he has been in pre-trial custody for one year, nine months and four days.

Having considered all the aggravating features, mitigating features and other case authorities, Justice Bird imposed a starting point of four years.

She then increased one year for the aggravating features and then deducted two years for the mitigation factors.

The defendant is therefore sentenced to three years imprisonment.

The incident happened on the morning of 26 July 2018 at a village at Marau.

The complainant cooked rice that morning at her aunt’s house and took a plate of rice to the defendant’s house to feed him.

She called the defendant but he did not answer so she walked into the house with the plate of rice because the door was open.

It was heard that once she was inside the house, the defendant held her and sexually abused her.

At that time complainant’s cousin brother came looking for her and the defendant stood up and run towards the door.

The complainant saw the opportunity, stood up and jumped out of the window and escaped.

The matter was reported to the police on the same day.