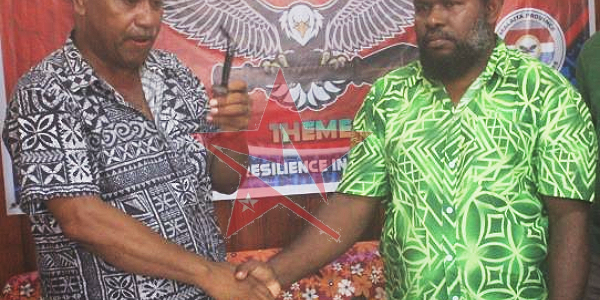 Suidani remains in power as mover withdraws motion under pressure

The Malaita Alliance for Rural Advancement (MARA) Government led by Premier Daniel Suidani has survived what was regarded as a second motion of no confidence against him after the mover of the motion MPA for Ward 11 Elijah Asilaua withdrew the motion under public pressure.

Mr.Asilaua withdrew the motion after his camp came under immense pressure from the public demanding the motion must be withheld as it is not in the best interest of Malaita Province.

The withdrawal letter dated 27 October 2021 2021 with the title, “NOTICE OF WITHDRAWAL OF MOTION – STANDING ORDER 139,” was addressed to the Clerk of the Malaita Provincial Assembly Mathew Maefai, and was signed by MPA for Ward 11, Premier Suidani, and Auki Police Operational Commander Charles Eddie Koto.

The letter reads, “On 18 October 2021, I Honorable Elijah Asilaua MPA for Ward 11 filed a Motion of No Confidence against Hon.Premier Daniel Suidani MPA for Ward 5.”

“Upon consideration of the grounds submitted for the Motion, and further consultations with other MPAs and in best consideration of the Malaita Province, I Hon.Elijah Asilaua, the mover of the motion now files this notice in according to standing order 139 and other standing orders as may be relevant to this notice to inform the Clerk of the Malaita Assembly that I now WITHDRAW the motion the Motion of No Confidence, which was supposed to be debated today 27 October 2021 2021.”

Mr.Asilaua also addressed another to the office of the Speaker with the title, “WITHRAWN OF THE MOTION OF NO CONFIDENCE – PREMIER DANIEL SUIDANI.”

“Attached is a signed copy of our Honorable Members.”

Both letters were signed by Mr. Asislaua.

Speaking during the signing of the withdrawal letter to officially withdraw the motion of no confidence, Premier Suidani thanked Mr.Asilaua for the wisdom for withdrawing the motion and said the step taken by the mover of the motion is proven to be the solution for peace yesterday.

The premier confessed that the situation is beyond his control as a Premier and said it is also beyond the control of the opposition camp led by Mr.Asilaua.

As a responsible Premier, Suidani issued an apology on behalf of the public for Mr.Asilaua for actions of the public which may hurt, insult, or cause fear for the Ward 11 MPA and MPAs in his camp.

“I on behalf of the Malaita public thank you for the wise decision you and your camp made, let us work together here and onwards.”

Speaking on behalf of non-executive members, Mr.Asilaua said seeing the situation the day before the motion, they try to dialogue with the Premier.

He said the decision to withdraw the motion was reached on Tuesday night after they assess the situation on the ground which is not safe.

The Ward 11 MPA said the decision was not his own, but a collective one from the non- executive members.

He said the situation is beyond the control of everyone including the police and said this is what triggers his camp to give in for the sake of peace.

With that, he assured the Premier and his executive that they will continue to work together for the good of Malaita Province.