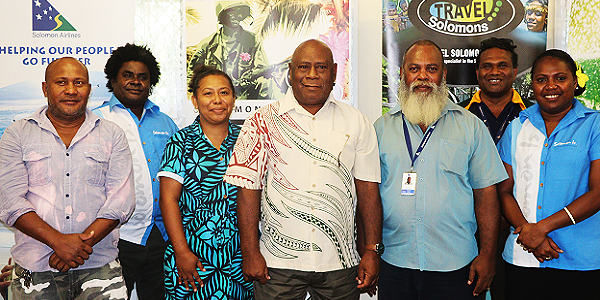 This was confirmed by the Commercial Manager for Solomon Airlines, Colin Sigimanu yesterday.

The Inaugural Solomons Airlines Peace Marathon was officially launched yesterday by the Minister for Culture & Tourism, the Hon. Bartholomew Parapolo.

The 2km, 5km and 10km race will be for fun and an open race to anyone willing to compete, whilst the half marathon race targets the best long distance runners from the provinces.

Top long distance athletes from the provinces will be transported to Honiara by plane.

This is a joint initiative between the Ministry of Culture & Tourism, Tourism Solomons, Travel Solomons and the Solomon Airlines.

According to a statement yesterday, adding a fun element to the day, the organisers are encouraging participants to compete wearing fancy dresswitha prize going to the best outfit judged in each category.

The Solomon Airlines Peace Marathon forms part of the ongoing ‘Iumi Tugeda’ campaign launched in September 2020 as part of a five-point plan intended to rekindle and sustain the Solomon Islands tourism sector’s fortunes as it looked to adapt to the COVID-19 environment.

While primarily positioned as a social event to bring the people of Honiara and the Provinces together in a fun activity in these uncertain times where the pandemic still dominates the everyday environment, the event is also intended to remind people of the ongoing Solomon Airlines-driven ‘Iumi Tugeda Holiday Program’.

Launched earlier this year, the initiative has played an active role in encouraging Solomon Islanders to holiday in their own backyard in support of our struggling tourism operators affected by ongoing international border closures.

As importantly, the event is also seen as being key in drawing the community’s attention to the celebrations being planned around an event which will once again see the world’s spotlight shine upon the Solomon Islands – the 80thAnniversary of the Battle of Guadalcanal which falls in August 2022.