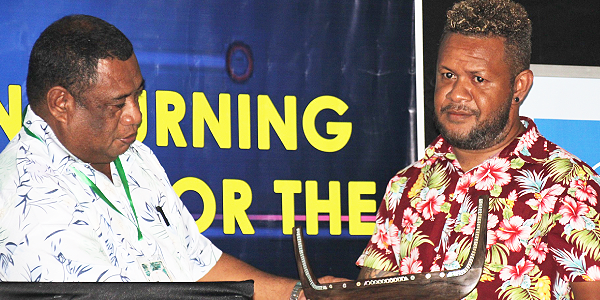 CHAIRMAN of the Pacific Media Summit 2022 and Vice President of the Media Association Solomon Islands Douglas Marau has described the Media Summit as a success.

Mr Marau said more than 150 media participants from around the region have left our shores over the weekend and some leaving later this week.

Speaking at the closing of the Summit, the PMS Chair said it is the biggest media gathering in the region and it was even more significant having more than 30 media managers, CEOs, Publishers, Editors, Team Leaders here in Honiara.

Mr Marau said he was encouraged to also see a lot of the young journalists, reporters, freelancers and media practitioners involved and helping out during the Summit.

“I also acknowledge the support by our senior media people in the industry the likes of Johnson Honimae, Allfred Sasako, Robert Iroga, Ofani Eremae and our local experts that have accepted invitations to be speakers and moderators at the sessions,” he said.

The PMS Chair said this should be a challenge to our young media people to continue with the legacy carried not only by our local media veterans but also our regional media veterans that are still here and those that have gone before us.

“It was indeed interesting to listen to the ongoing challenges shared during the discussions during the Summit, and the questions raised whether we are a free pacific media as we claimed to be,” he said.

He also acknowledged the discussions on the challenges from the analog era to a digital era and how digital technologies are increasingly being used by our digital generation in the Pacific Islands to harness, influence and project political and social change.

“We should be inspired by one of our reputable media figures in the Pacific Mr Kalafi Moala’s reflection on how a few pacific islands came up with a conviction to establish a body to promote and defend freedom of expression in our region,” he said.

The PMS Chair would also like to thank the following for their support towards the successful hosting of the Pacific Media Summit 2022.

And our very big and sincere thank you from MASI and our members to Makareta Komai and her team from the Pacific Islands News Association (PINA) in Fiji for co-hosting and making this event a success.