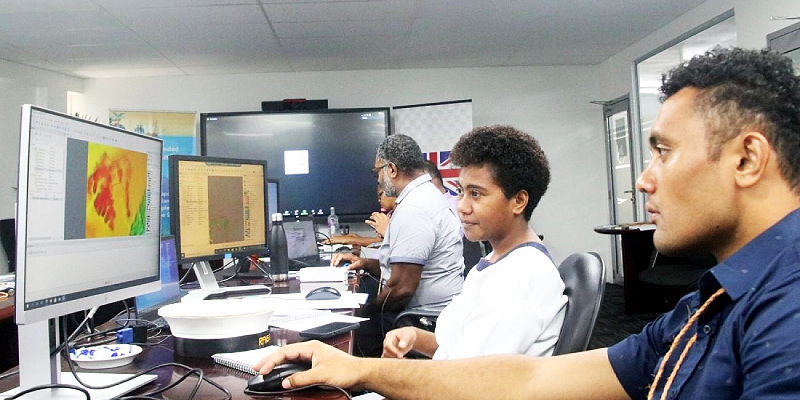 The training, funded by the United Kingdom and delivered in partnership with the Pacific Community (SPC) under the Pacific Extended Continental Shelf Project, is the first of several across the region that will strengthen national ocean governance through improved local knowledge and technical skills.

“Maritime zones are the foundation of good ocean governance and Fiji is committed to delimiting and declaring all its boundaries and zones with the United Nations,” said Fiji’s Permanent Secretary of Defence, Policing, and National Security, Mr. Manasa Lesuma, at the training opening on Monday 28th March.

A country has exclusive, sovereign rights to conserve, manage, or explore seabed resources such as oil and gas, bottom-dwelling creatures such as clams, crabs, and corals, and deep sea minerals within their ECS.

“Establishing rights over these ECS areas is crucial for the stability and development of Pacific island countries. Until these gaps in the world map are closed, Pacific island countries may not be able to fully protect their interests and achieve their blue economy aspirations,” said His Excellency Dr. Brian Jones, the British High Commissioner in his address to the trainees.

Mapping and declaring these ECS areas, however, is not an easy task. To complete a submission to the UN Commission on the Limits of the Continental Shelf (CLCS) requires specialised geoscience expertise and deep sea data which is not always readily available in the Pacific. In addition, submissions may wait years in the queue before they are reviewed by the CLCS.

“One of the challenges we’ve seen across the region has been the loss of institutional knowledge at the national level,” said SPC’s Deputy Director-General Science and Capability, Dr. Paula Vivili. “The people who drove much of this work when it began in 2005 have moved on or started to retire.”

In this respect, this week’s training filled a critical gap for Fiji by training up the next generation of maritime zone experts to take up the baton. Most trainees were early career professionals with expertise in geospatial analysis, hydrography, and geoscience who gained familiarity with the software for the first time.

“This one software can complete a task which normally requires three different software packages,” said trainee and Fiji Navy marine cartographer Ms. Sulueti Savou. “The training has been really useful and will be helpful to me in developing nautical charts.”

The training recipients were awarded certificates at a ceremony hosted at the British High Commission Residence in Suva on Friday 1st April.

Subsequent trainings under the Pacific ECS Project will be hosted in Vanuatu and Solomon Islands later this year. Launched in July 2021 under the UK’s Conflict, Stability, and Security Fund, the £363,000 project is supporting Fiji, Solomon Islands, Tonga, and Vanuatu to build local capacity, procure specialised software and hardware, acquire data, and, where required, engage experts in geophysics and legal drafting to help progress ECS submissions.