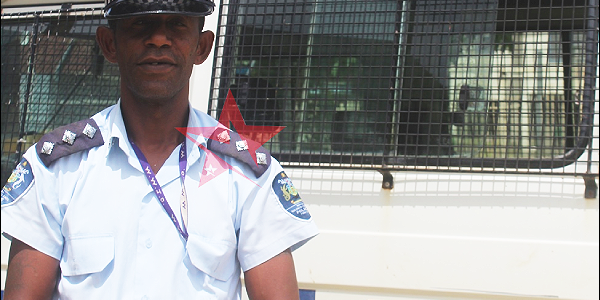 A POLICE Maritime Patrol Boat is heading to Malaita provincial capital, Auki to monitor the law and order situation and a possible mass arrest, it was revealed.

Solomon Star was told on Saturday that a group in East Malaita, consisting of ex-militants who have been harassed by a mob in Auki recently are planning retaliation in Auki.

They also demanded the removal of Malaita Premier Daniel Suidani.

The group had a meeting at Faumamanu last Friday, planning their retaliation at those who halted and harassed them in Auki, Thursday this week.

The intention of the meeting was for retaliation, he said.

Inspector Ramosaea also confirmed that Patrol Boat 06 will be in Auki for the next three days to monitor the situation to avoid any further escalation of lawlessness in the province.

However, this paper was informed that the Patrol Boat will be in Auki to make arrests in relation to the recent riot, burning, and looting in Honiara last November.

This paper was informed that police want these Malaitans arrested in relation to the recent riot, looting, and burning in Honiara in November.

However, it was claimed that their strong stance against the China Switch is the real reason behind the plan to arrest these Malaitans.

It was claimed that the arrest list was prepared by the PMO and handed down to the Police Commissioner for action, to please the DCGA government and China.

Yet, Inspector Ramosaea refuted the claim.

“The Patrol Boat is not here to arrest Malaita leaders, but to monitor law and order here to ensure the rule of law is respected and to prevent further escalation of the issue between the two groups.”

He said in times like this, maintaining law and order is imminent to ensure these two groups act in the boundaries of law until a time that they properly talk the issue over through proper dialogue.

In the meantime, Inspector Ramosaea calls for calm and proper dialogue to iron out the difference between the two groups.

He also called on the two groups to respect each other as one Malaita people.