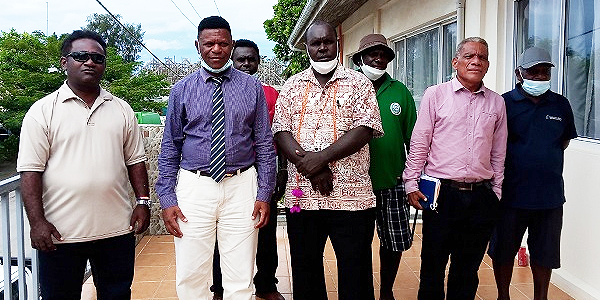 A MEETING by all provincial premiers to push for the federal government system is being proposed.

The meeting proposed for this month will be hosted and spearheaded by Guadalcanal Provincial Government (GPG).

The purpose of the joint meeting is to discuss with Prime Minster Manasseh Sogavare to quickly push for the Federal System Government.

During a courtesy call by the Guadalcanal Provincial Government (GPG) delegation yesterday to the Western Provincial Premier Office, the push for federal government system was one of the main key agendas that were discussed.

The discussion agreed that all the provincial governments need to put pressure and push for the federal state system because only the national government has the power to pass it in parliament.

Both Guadalcanal and Western Provinces have been working hard to push for the state government.

The Deputy Premier of Guadalcanal Province Lazarus Alfred Rina who led the GPG delegation to Gizo this week said, “the wait will soon be finally over and the time frame for the power to give us the self-autonomy that is still controlled by the national government must come to take place.”

He said, the two provinces have been patient enough to see the process done by government to carry out tasks related to the statehood system.

“But it’s time to decentralize the power so that each province can do their own things,” he said.

He added, unlike Malaita Province which had some issues with the national government because of their own political interests and both external and internal issues;

“we are closely watching what the national government is doing so far regarding the Statehood Government proposed draft.”

Western Provincial Premier, Christian Meseptu stated that both the Guadalcanal and Western Provinces are the two biggest provinces in Solomon Islands.

“And to make things happen it will need cooperation between all the premiers of the nine province,” he said.

He said, the government will not consider any other forms of self-autonomy but it will stand on the recommendation by Eminent Persons Group for the Federal System.

PM Sogavare further highlighted that the draft Federal Constitution takes more than 10 years and over $100 million of budgetary provisions to develop.

He made a strong assurance that government is committed to introducing the Federal System of Government as recommended by the Imminent Persons Group.

He said government’s commitment to ensure that the much sought after state government system will be implemented. Meanwhile, It is expected that the Federal Draft Constitution (FDC) is at the hands of the National Government and PM Sogavare promised that adoption of the Federal Statehood will be ready by 2026.