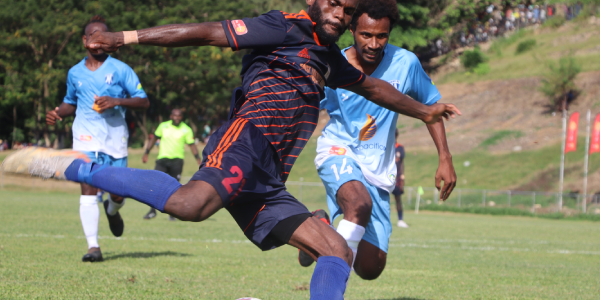 The deal was sealed before the world cup qualifiers as the Adelaide City backroom staff watched Mekawir from the last season’s Telekom S-League. That was when the player had an outstanding outfit for Waneagu FC.

In an interview with SIFF Media, the young footballer said that he is very happy to continue with his football dreams in a new environment.

The lad from Temotu said he dreams to follow in his late uncle Commis Menapi’s footsteps and vowed to do his best for his new club.

“I am very happy to come here and continue my football career.

“It won’t be easy coming into a new environment but that’s part of football.

“I’ll do the best I can and give glory back to God who makes things happen,” Mekawir told SIFF Media in an earlier interview.

Mekawir started his football career with Hana FC in the HFA Premier Division before joining Marist FC in the 2018 Telekom S-League season. Also played for Honiara U-19 in the National U-19 Championship 2018.

He was part of Solomon Islands national youth team setup having represented the country in the OFC U-17 Championship 2017 and OFC U-19 Championship 2018 both held in Tahiti.

He joined non-league English side Langney Wanderers two years ago being part of the Royals and Star Academy pathway programme.

His brief spell in the Sussex County League with Langney was cut short and he returned home to join Telekom S-League debutants Waneagu United which caught the eyes of Adelaide City.

Recently, Mekawir was called up into the national team for the Australian camp and the recent FIFA World Cup 2022 Oceania Qualifiers where Solomon Islands finished second behind New Zealand.

Adelaide City also had the opportunity to watch Mekawir playing for the national team in Brisbane and the FIFA World Cup 2022 Oceania Qualifiers in Doha, Qatar.

Adelaide City became a foundation member of Australia’s National Soccer League (NSL) and won the NSL five on three occasions and holds the record for most consecutive finals appearances.

With the collapse of the NSL imminent, Adelaide City withdrew from the NSL in 2004 and focused on the rebuilding of the club and its home base at Oakden in South Australia

Adelaide City celebrated its 60th anniversary in 2006 in splendid style by winning all 3 domestic competitions. It won the 2006 pre-season Errea Cup, the 2006 Knock-out Federation Cup and the 2006 BEST Super League completing the season undefeated. Adelaide City FC has won a remarkable 17 Championships. That’s one Championship every 4 years. A truly outstanding achievement by a truly outstanding club.

The club is currently playing in the National Premier League South Australia (NPLSA).

Mekawir had his first training session with Adelaide City yesterday and is looking forward to making his debut soon.