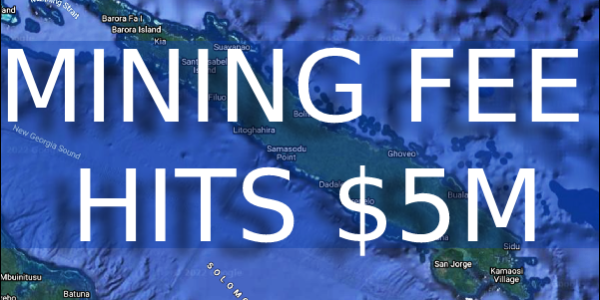 THE Isabel Provincial Government has substantially increased its Business Licence fee for mining from $1 million to $5 million a year – an increase of 500 percent on the previous rate.

The move has raised alarm bells ringing in the industry with some saying there is no justification for the increase unless it was designed “to kill the goose that lays the golden egg.”

The new mining fee is amongst a raft of new charges the Provincial Government introduced in amendments gazetted last year.

The PROVINCIAL GOVERNMENT ACT 1997 (No. 7 of 1997) ISABEL PROVINCE BUSINESS LICENCE (AMENDMENT) ORDINANCE 2021 was signed off by the Minister for Provincial Government and Institutional Strengthening, Rolland Seleso.

The price of drums of fuel (Petroleum) has also gone up and is based on the number of drums as follows:

Apart from these new fees, the Isabel Provincial Government also received part of the 3 per cent royalties from the FOB export value paid to landowners.

Solomon Star was unable to confirm whether the new increases in the range of fees in Isabel Province also apply on Guadalcanal and Renbel Provinces where mining activities are taking place.

It is also unclear whether the Ministry of Mines, Energy and Rural Electrification were consulted on the new Mining Business Licence fees before they were gazetted last April.

Industry leaders told Solomon Star the move by the Isabel Provincial Government in increasing Business Licence fees on mining and mining related activities are certain to make investors think twice about investing there, given that mining is a costly industry.

Mining, like logging are the only two sectors that are bringing foreign exchange earnings for the government.