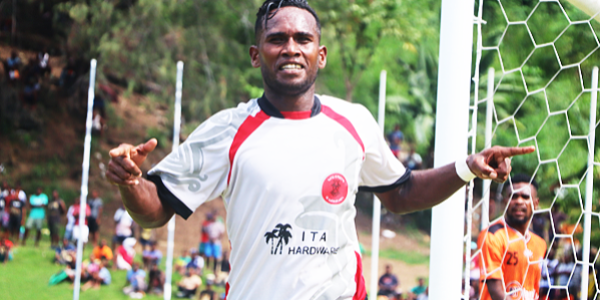 Solomon Warriors wonder boy Tigi Molea is now leading both the TSL and Umi cup golden boot ace as both competitions are slowly coming to an end.

Molea’s race towards the golden boot title for both the TSL and Umi cup is heating up as he extended his number of goals over the weekend.

He leads the TSL golden boot tally along with the Kossa FC elastic striker Gagame Feni during their clash with Southern United FC in match week 20 when scored 2 goals.

Meanwhile, Molea is also leading the golden boot race in the Umi cup championship after he helped his team Kasigu to defeat Rendova Baruku 8-3.

He scored six goals during their match to sit comfortably on top of the Umi cup golden boot race with 17 goals.

He topped the tally during the Umi Cup top 16 matches on Monday.

The second spot holder is John Orobulu who needs only 2 goals to equal Molea.