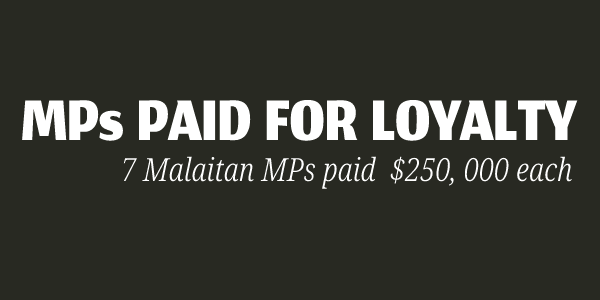 SOME $1.75 million were allegedly ‘doled’(paid) out to Malaitan MPs to remain with the DCGA government following last November’s riot and burning and the subsequent vote of no confidence in Prime Minister Manasseh Sogavare in early December, sources have claimed.

If the claims are true, it means each of the seven Malaitan MPs collected a tidy sum of $250, 000 in order to vote with the government. Prime Minister Sogavare won the no-confidence motion by a landslide.

A subsequent investigation by Solomon Star has established that:

In its investigation that followed, Solomon Star spoke to independent sources, including a businessman who spoke on condition of anonymity.

“Yes, I am aware that each Malaitan MP in the DCGA collected $250, 000 in order to remain with the government. The money was delivered the day after the meeting,” the first source said.

Meanwhile the businessman said he was aware of the payment to the Malaitan MPs. He was also aware of the overtures made by a senior government minister offering on behalf of the group to cross the floor if the Opposition had the money.

“In the end the Opposition refused to entertain the offer. It was more a fund-raising drive by individuals rather than conviction of the need for change,” the businessman said.

Prior to the November riot, voters particularly from Malaita demanded that their MPs resign from the DCGA government. They falsely accused the Sogavare-led government of selling Solomon Islands to Chinese interest.

When Malaitan MPs in government reneged on their undertaking to leave the DCGA, voters unleashed their anger on innocent Chinese businesses and other local businesses in Chinatown, Kukum and Ranadi.

The cost to the economy of the four-day riots was estimated at $800 million, according to government estimates.

According to sources, the Malaitan MPs said they could no longer bear to see another episode of destruction if they supported Prime Minister Sogavare in the upcoming vote of no confidence.

But sources failed to explain why the seven Malaitan MPs decided to vote with the ruling DCGA government.