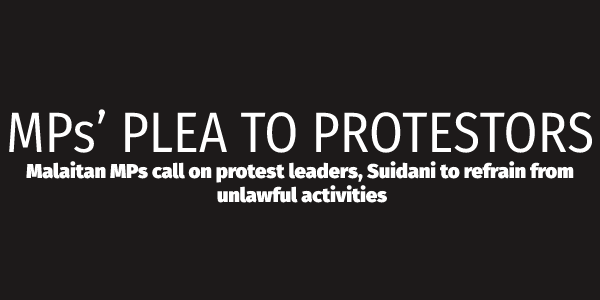 Members of Parliament (MPs) from Malaita within the Government have appealed on the proposed protest leaders and Premier Daniel Suidani to refrain from inciting Malaitans to engage in unlawful activities.

This came after they have been reliably informed with grave concerned by the continuing build-up of protestors coming from Malaita for a planned protest against the National Government, Malaitan Members of Parliament and the Prime Minister,” a statement by the Malaita MPs said.

“We, appeal to the leaders of Malaita in Honiara, including the Premier of Malaita and his executive to duly exercise your duty and moral obligation as leaders to un-categorically and unconditionally recall our people, our brothers and sons from carrying out such a potentially dangerous and violent actions,” the statement said.

The statement said nothing good will come out from such actions which is designed to serve the interests of a select few who have no regard for our peaceful co-existence and unity.

The devastating consequences that such actions will have on the local people and future will take this country back 20 years.

The statement said “as your legitimate and legally elected representatives in Parliament we also appeal to our good people of Malaita to respect our status and blood-ties as fellow Malaitans and Solomon Islanders.

“Please remain in your villages and homes and refrain from being used by political opportunists taking advantage of your genuine frustrations to incite violence for their own end,” the statement.

On the same note, the Malaita MPs warned in the strongest term possible the Leader of Official Opposition Mathew Wale, MP Peter Kenilorea Jnr and the other MPs in the opposition to refrain from fanning the flames of violence and incitement.

“For you will not be remembered in history as honorable leaders of men but instigators of strife, violence, anarchy. If you have issues with the Government, the democratic way to resolve this is on the floor of Parliament and not on the streets of Honiara. Our people do not deserve another civil unrest,” the statement said.

“We also appeal to you all to respect our cultural and social values as members of tribes, clans and families. We sincerely appeal to you at this very pivotal moment to realize that our destiny is in your hands.

“Should you choose violence and intimidation and not dialogue and the respect of rule of law, our relations, our lives, our futures, democratic values may be irrevocably affected,” the statement added.

Meanwhile, the Malaita MPs also appeal to their political supporters to refrain from antagonistic engagement to avert harming our own brothers and sisters.

The statement further added that Democracy is built on the principles of respect for the rule of law and the democratic process, not threat of violence and anarchy.

“We assure you all that we the Malaitan MPs will pursue respectful dialogue with the Malaitan Provincial Leaders to deal with the genuine and legitimate concerns of our people in accordance with our customs, values and traditions,” the statement said.

“We are a people who have customs, values, beliefs and culture. We must respect Honiara City and the people living in it, who comes from other islands and provinces as well. We must also respect Guadalcanal, the host province of Honiara City.

“Let us be a force of unity rather than one that is destructive to the existence of our nation.

“May God Bless us all and may God Bless Solomon Islands from shore to shore,” the statement concluded.