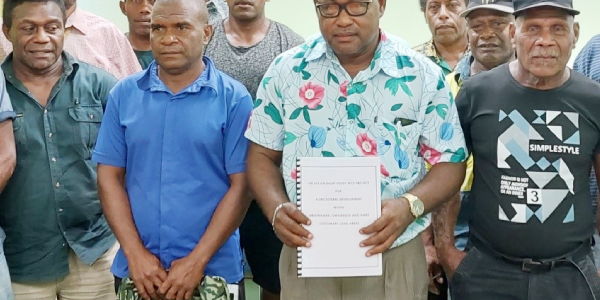 AULUTA Basin landowning tribes have come forward and presented copies of their land ownership documents to the national government to proceed with the Rice project proposed by the Member of Parliament for East Malaita and Deputy Prime Minister, Manasseh Maelanga.

Speaking during the handover, the Deputy Prime Minister said Auluta Basin was earmarked for Oil Palm but no progress has been made despite attempts by successive governments to implement the project.

He said for long time, the project remained idle and that prompted the present Democratic Coalition Government for Advancement looked at the prospect of converting the Oil Palm project to a Rice farm project.

The Deputy Prime Minister said the presentation of the required land documents to the government, demonstrated the landowners’ willingness to see materialisation of the Rice Farm project.

He said the government will work on the budget for 2023 and this project can be factored into it.

MCILI Deputy Secretary-Technical, Mr George said the event symbolised the beginning of a fruitful milestone as both the resource owners and the national government are looking forward to collaborate in ensuring the successful implementation of the project.

He said an economic benefit from it is the substitution of imported rice.

Mr George said if imported rice is substituted by the locally-grown rice, it will inject cash into the national economy and improve the livelihood of the resource owners.

MAL Deputy Secretary, Mr Ho’ota added that rice tops the list of imported goods with an average of $300-million annually and hence there is high demand for rice in the domestic market.

He said one of the challenges hindering national projects is land issues and MAL finds this hard to deal with.

Mr Ho’ota said with the resource owners themselves taking the lead in spearheading the project, it will certainly be easier for the project to eventuate.

Representative of the Auluta Basin landowning tribes, Haynes Alfred, expressed that they are happy to present the land document requirements to the government for the project.

He said they fully support the proposed rice project and looking forward for its successful implementation.

Initial discussions towards the establishment of the rice farm commenced on 20August this year in a meeting held at Tatali Growth Centre in East Malaita.

Auluta Basin was initially earmarked for a palm oil project, a national project that was pursued since the prime ministership of Sir Alan Kemakeza,

However, due to land disputes and other environmental issues, the project never progressed and this prompted DCGA to switch to a rice-farming project. Landowners hold Perpetual Estate (PE) titles to their lands.

The landowning tribes were very supportive of the idea but told Mr Maelanga that they do not want a repeat of what had happened to the Auluta oil palm project.

They told him that they want the rice project to be implemented and accomplished to help boost the economy.