You are here:
News - Regional 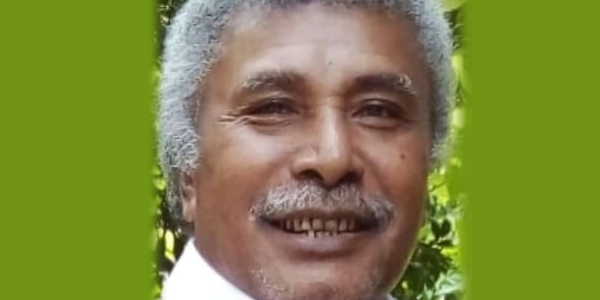 PORT VILA, VANUATU (22 February 2022): After a lengthy process, the MSG Secretariat has a new Director General, he is Mr. Leonard Louma OBE from Papua New Guinea. This follows an announcement by the Chairman of the MSG and Prime Minister of Papua New Guinea, Honourable James Marape in an Official Statement issued on the 1st of February 2022 in Port Moresby. The MSG Secretariat was without a Director General since the departure of former Director General, Ambassador Amena Yauvoli of Fiji who served the Secretariat from 2016 – 2020.
The Official statement of appointment was delivered on behalf of the four MSG Leaders including, Honourable Josaia Voreqe Bainimarama MP, Prime Minister of the Republic of Fiji, Honourable Manasseh Sogavare MP, Prime Minister of Solomon Islands, Honourable Bob Lougman Weibur MP, Prime Minister of the Republic of Vanuatu; and Mr Victor Tutugoro Spokesperson of the FLNKS.
Prime Minister Marape stated that the appointment of Mr Leonard Louma was a result of a lengthy and rigorous merit-based process of appointing a new Director General. He reiterated that the process of recruitment of the new Director General was done in accordance to the agreed policy process of recruiting a new Director General which was adopted at the 20th Leaders’ Summit in Honiara, Solomon Islands on 26 June 2015. The Process is based on a merit-recruitment system that allows for a best candidate to be appointed.
In compliance with the agreed stipulated policy, a Recruitment Committee comprising of Members (PNG, Solomon Islands and Vanuatu), also called the TROIKA did a thorough screening of applicants, shortlisting and interviewing of the shortlisted candidates. The TROIKA from its interviews and assessment concluded and recommended in their report the appointment of Mr Leonard Louma as first choice. In the event that that he declines then the offer can be given to the alternative next best preferred candidate. The recommendation as contained in the TROIKA report was considered by the MSG Senior Officials Meeting (SOM) and duly endorsed out-of-session by the MSG Foreign Ministers Meeting (FMM).
The MSG Chair further officially requested for his MSG Colleague Leaders to consider and approve out-of-session the appointment of the new Director General in December 2021. And having received no objection from his colleague MSG Leaders when the due date for consideration had lapsed, he proceeded with the necessary preparations to make the formal announcement of the appointment.
Prime Minister Marape in his statement stated that, he is satisfied and confident that due process had been complied with and that his announcement of the appointment of the new Director General is in order and in the best interest of the MSG Group.
While he conveyed his appreciation to his colleagues, the MSG Leaders, for their continuous support and confidence rendered to him as the MSG Chair, he reiterated the fact that the MSG Secretariat has been without a substantive Director General for 1 year and 10 months and has been the longest since the establishment of the Secretariat. Therefore, the appointment of the Director General is a necessity and a matter of urgency for the Group.
Prime Minister James Marape on behalf of the MSG Leaders, in congratulating the newly appointed Director General, Mr Leonard Louma stated that he has confidence in him to continue to lift the visions, spirit and solidarity of the MSG and moreover to lead the MSG Secretariat into new heights.
Mr Leonard Louma OBE who hails from Milne Bay Province in Papua New Guinea is a former seasoned diplomat and a senior public servant who had more than 30 years of senior management experience in both the government and private sector. Mr Louma has served in the Papua New Guinea Permanent Mission to the United Nations in New York (USA) and the Papua New Guinea Embassies in Paris (France) and Beijing (China). He was responsible for opening the PNG Embassy in Paris as Charge D’Affaires and was Papua New Guinea’s roving Ambassador to APEC, ASEAN, ESCAP and concurrently PNG High Commissioner to Singapore.
Additionally, nationally he had served as head of several departments within the Papua New Guinea Department of Foreign Affairs and the Office of the Prime Minister. In the latter, he served as Special Advisor on International Relations, Foreign Policy and Foreign Affairs matters to the Prime Minister and subsequently as Chief of Staff to the late Prime Minister Grand Chief Sir Michael Somare from 2005 – 2011.
Regionally, he has been involved in the development and implementation of many regional initiatives such as the original Pacific Plan and its successor in the Framework for Pacific Regionalism, MSG’s 2038 Prosperity for all Plan as a member of an Eminent Person, The MSG Trade Agreement, Re-enlistment of New Caledonia on the UN list of Non Self Governing Territories, the development and negotiation of the binding tariffs for PNG’s WTO membership bid, and the development of the Pacific Island Forum’s Boe Declaration.
Prior to his appointment, Mr Louma continues to be engaged privately as a free-lance consultant providing strategic advisory services to the Papua New Guinea Government including strategic business advisories to several private organisations and businesses in Papua New Guinea.
Mr Louma has officially accepted the appointment and preparations are now underway to enable him take up his posting in the MSG Secretariat headquarters in Port Vila, Vanuatu.
Category: News - RegionalBy Sol Star NewsFebruary 22, 2022
Share this post
Share on FacebookShare on Facebook TweetShare on Twitter Pin itShare on Pinterest Share on LinkedInShare on LinkedIn

‘The Pacific can’t survive if richest corporations and governments continue to put profits over people and planet’
May 6, 2022

Handover of USAID funded critical care consumables to Fiji Ministry of Health
May 6, 2022

Tapping into $1 Trillion Global Outsourcing Services Sector Can Provide Fiji with Climate-Resilient Source of Jobs and Growth
May 4, 2022
Alarm over China-SI deal brushes over limits of Australia’s ‘influence’ in Pacific
April 23, 2022