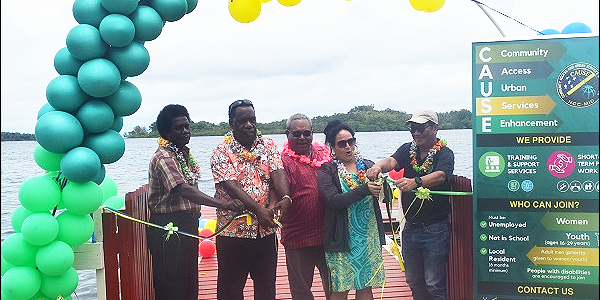 MARKET vendors arriving by outboard motor (OBM) to sell their produce at the Gizo main market in Western Province now have a new jetty to unload their produce.

This was made possible thanks to the Community Access Urban Services and Strengthening Enhancement (CAUSE) project.

The newly constructed jetty which is located in front of the market and was constructed by trained youths in Gizo.

It took several months to complete the project.

It was officially handed over to the Western Provincial Government (WPG) last week.

The jetty was described as a milestone for the province and all the market vendors who will use it to unload their produce from boats when arriving at the market from the nearby islands.

Speaking at the occasion CAUSE Project Manager Apable said, the new jetty wharf will help all the market vendors who are doing business here at the Gizo Market.

He said this is another milestone for the province in terms of development assets that will bring benefits for both social and economic to the people.

“This asset given to you is very important and its important for you to look after it and take responsibility.

“We want this asset to last long so that it will bring benefits for the other generations to come.

“Please communities and citizens take ownership and honor this project,” he said.

In her remarks, the World Bank rep Ms Mahood said the CAUSE Project has created more opportunities for youths that are unemployed by giving them chance to showcase their skills and talents.

Nadia said this contributes to the social advancement for young and adult populace in the communities which had a really positive and greater impacts for the lives of people that engaged in the CAUSE Project and get benefits out of it.

CAUSE Project Manager at MID Belamie said its important to maintain and sustain this important asset so that many communities, market vendors and general public will benefit from it now and into the future.

“The main achievements here is for communities and the vendors to sustain this assets, not us because in the end, we will retire, and the money will go but the asset will be there for you to use and sustain,’’ he said.

Gizo Town Clerk Kelly thanked the CAUSE Project, MID engineer, HCC, WPG and the UN Women Market4 Change for the mutual partnership that has resulted in such an important development for the people.

“The important message here is to take honor and ownership of the infrastructure and assets,” he told the vendors and the public.

Mr Kelly and the President of Gizo Market Vendors Association (GMVA) also appealed to the market vendors and the general public to respect the jetty.

To officially open the jetty a ribbon cutting ceremony was held after the speeches were delivered.

It was revealed two more jetties will be constructed at the Gizo Market early next year.

The guests also visited the Banana Valley Satelite Market to open it.

Munda Market and Noro Market were also funded under the CAUSE Project were also unveiled last week.