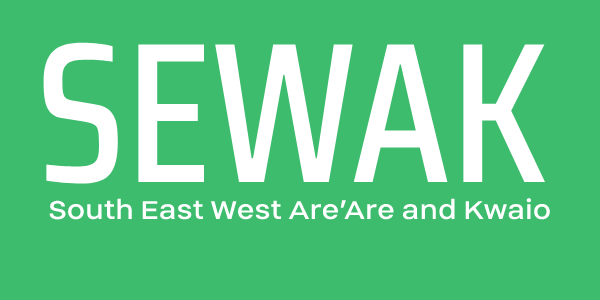 MALAITA South East West Are’Are and Kwaio (SEWAK) – a newly-formed alliance which represents nearly fifty per cent of Malaita Province – has distanced itself from the “ongoing internal radical contention displayed by the MARA regime towards the Solomon Islands Government.

Instead, it will work towards establishing a new province to be known as SEWAK to pursue the development aspirations of its people.

“SEAWAK is profoundly dismayed by the ongoing internal radical contention” on issues of interest to Malaita, the new alliance said in a statement issued yesterday.

“On this note, SEWAK as a group of responsible and concerned Leaders from the Southern Region of Malaita Province condemns and deplores in the strongest term the current political upheaval displayed by MARA towards the SIG, including the recent planned protest that resulted in the rioting, looting and burning of properties and businesses in Honiara in the past week.

“We therefore, call on all SEWAK citizens residing in Honiara and elsewhere to stay out of any further planned protests, meetings and gatherings construed to be detrimental to the peaceful co-existence and stability of our Province and Country as a whole.

“SEWAK would like to remind the MARA Regime and the SIG that our Founding Fathers of the Maasina Ruru Movement in 1944 have risked their lives and the lives of their families and properties to make Malaita and the rest of the Solomons a better place for all of us to live together in peace and harmony.

“Thus, SEWAK would like to re-emphasize the Founding Definition of our Maasina Movement which is based on “brotherhood” and “oneness”. That we, as Solomon Islanders must remain as one people with a common destiny at all times, our unity and togetherness must not be tampered with by individuals, institutions and foreign forces taking advantage of our differences,” the statement said.

“Furthermore, SEWAK would like to also re-emphasize that our founding pillars of the Movement were based on self-determination to be resilient in developing our society; peaceful co-existence; communal shared responsibility; equal sharing of resources and benefits; and foremost to care for one another as one people with a common heritage from our forefathers.

“SEWAK therefore, calls on the SIG to setup a bipartisan task force to mediate between the MARA Government, Malaita National Members of Parliament both in the Opposition and Government and the DCGA. The role of the task force is to resolve the current internal strife and to build better understanding and trust between MARA and SIG on issues pertaining to developing Malaita,” the statement said.

SEWAK members of the Southern Region of Malaita also “strongly condemn previous statements made by several Malaitans on behalf of Malaitans residing in Honiara.

“Statements made by the National Members of Parliaments representing South Malaita, East and West Are ‘are Constituencies and social media posts are detrimental to our peaceful co-existence as one people, one nation Solomon Islands.”

“SEWAK, as a responsible and concerned group of Leaders from the Southern Region of Malaita strongly deplores all previous statements made by the MARA Regime and M4D on the intention to declare Malaita as an Independent State from Solomon Islands, for the following reasons;

“Therefore, SEWAK as a responsible group will work towards establishing a Province of its own as an avenue to strengthen the current socio-economic development aspirations of Malaita and its people.

“The proposed name of the new Province is “SEWAK”. This is a noble intention, and is not in any way aimed at disuniting Malaita, but to enhance the socio-economic development on Malaita.

“A task force will be assigned soon to plan, design and progress this noble objective. Formal submissions will be made to the SIG in early 2022 for further endorsement by responsible Institutions,” the statement said.

“Our people from the SEWAK Regions of Malaita and in Honiara would like to humbly assure the nation and its peace loving citizens that we will remain part of the Solomon Islands as a Sovereign State within the Commonwealth and United Nations.

“As this is the legacy left behind by our forefathers through the Maasina Ruru Movement, the late Aliki Nono’oohimae, Hoasihau, and Nori from ‘Are ‘are, Jonathan Fifi’i from Kwaio, and joined later by Timothy George Maharatta from South Malaita. Therefore, SEWAK will maintain this legacy and will continue to work tirelessly together with all other Provinces to remain united as Maasinas, one people, one nation and one destiny.

“Thus, SEWAK members as responsible and concerned citizens of Solomon Islands will seriously consider taking appropriate actions to defend this noble intention to remain part of the Sovereign State of Solomon Islands, and will work with appropriate Government Institutions towards achieving this objective.”