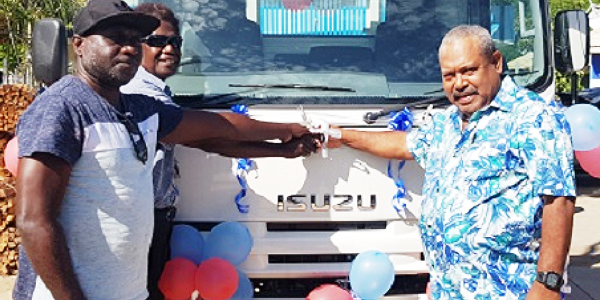 THE Government of Australia has delivered a new tipper truck to Western Province on Monday to boost waste management efforts at the main Gizo market.

The handing over ceremony was held at the Gizo main central market and was witnessed by invited officials and the general public.

Speaking during the handing over ceremony, National Project Coordinator for UN Women Markets for Change (M4C) Project in Solomon Islands Colin Potakana said the tipper truck is part of a support that the Australian Government has provided through the M4C Project for Gizo Market to support the management of waste collection.

He said the truck was procured late last year by the M4C Project upon request by the Western Provincial Government (WPG) through the Gizo Town Council to ensure rubbish collection at the market is supported.

“There were some delays due to recent COVID restrictions. However, we are now happy that the vehicle has finally been delivered this week.

“I would like to thank the Australian Government for making this possible for our market and market vendors,” Mr Potakana said

Mr Potakana highlighted that the Australian Government has been the country’s key donor partner to the UN Women Markets for Change Project since 2014.

“Your continued and generous support has enabled us to implement many activities for our women market vendors across four markets-Honiara, Auki, Gizo & Munda- in Solomon Islands.

“Today’s handing over is one of such support that Australian Government has provided.”

“I would also like to thank the WPG (Western Provincial Government) for the partnership we have with the UN Women M4C project. The WPG is a key stakeholder of the project and we have provided support to the Gizo and Munda markets in the last few years. These included tents, chairs, tables and trainings,” Mr Potakana said.

“This tipper truck will definitely help to improve the needs and aspirations of the market vendors in Gizo in ensuring the market is always kept clean and tidy,” he added.

A statement from the Australian Government said Australia is committed to strengthening women’s economic empowerment.

“The support to the Markets for Change project assists the many female market vendors, who work hard to feed their families and communities, by making sure market places are inclusive and safe work environments.

“Through this project great things have been achieved. The project, now operating in Honiara, Auki, Gizo and Munda has seen female vendors grow from strength to strength,” the statement said.

It added that Australia remains committed to its partnerships in Solomon Islands and is proud to be the largest donor to gender equality in the country and its support has remained strong throughout the COVID-19 pandemic.

“Australia looks forward to continuing our partnership with UN Women to further the economic empowerment of female vendors through the Markets for Change project,” the statement further added.

Gizo Town Clerk Charles Kelly, in turn, thanked the Australian Government and the UN Women M4C Project for the gift which he described as ‘very important for Gizo town.’

He said with the rubbish-collection tipper, the Gizo Town Council will be able to deliver a better service in properly collecting rubbish and disposing them at the assigned rubbish dumpsite.