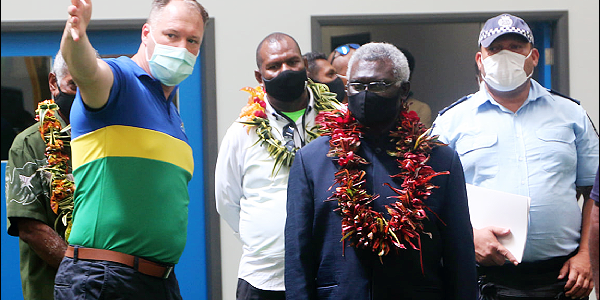 Uninformed calls for the delay of the 2023 Pacific Games will not turn back the National Government since the Games preparation is the single largest catalyst that is driving economic activity at this point in time for the country.

Prime Minister Manasseh Sogavare made the assurance on Friday to guarantee the nation of the benefits of hosting the Games next year following a full briefing to the Government Caucus and Cabinet by the National Hosting Authority last week.

The construction program of the 2023 Pacific Games is currently employing almost 600 nationals.

Sogavare further announced that in the next 20 months, the 2023 Pacific Games preparation will not only invest more than 1.5 billion dollars into the local economy but it will engage and employ up to 10,000 people.

He added hosting the Games is the principle driver of other major projects such as the Kukum Highway project, the International Airport project, the road network from Honiara City Council to White River, the Tina Hydro project, improvement projects in Honiara city and the markets development in Honiara and Guadalcanal province.

He said collectively, the 2023 Pacific Games is mobilizing more than 3 billion dollars of additional investment to be injected into the local economy in the next 2 years through other projects.

“Without the 2023 Pacific Games, these projects will either get stalled, or even be cancelled.

“Let me assure the people of Solomon Islands, the Pacific Games is the main driver of our current economic revival, it is one of the major employer of Solomon Islanders, and it is the principal catalyst for other major economic activities for our country,” Sogavare said.