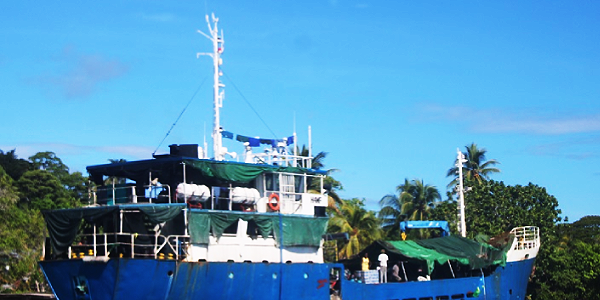 Child, 2, dead after falling from berthing ship at Nila, Shortlands

A TWO-year-old boy fell to his death in the early hours of yesterday morning from a ship in the Shortlands Islands, Western Province without the knowledge of his family members.

Reports reaching this paper yesterday said a family had boarded the ship ‘MV Shortland’ at Gizo on Sunday evening to travel back to their home in Shortland Island where the incident took place.

The ship having reached its destination while still dark, many passengers opted to stay on board and await daybreak before disembarking.

It was said that the child was sleeping at the stern (back) of the ship with his mother and siblings when the two-year-old adopted child fell from the ship and later drowned.

Though it is it is yet to be properly confirmed whether the child was awake or asleep when he fell off the ship, the incident happened without a sound loud enough to alert any other person onboard MV Shortland.

According to relatives of the victim’s family, the incident took place at Nila wharf front in Shortland Islands.

It was said that not even a single person on board the ship saw the young child fall from the ship and simply disappeared.

The victim’s sister was said to wake up around three o’clock in the morning and realized that her brother had gone missing that of which began a search.

The search was unfortunately called off by daybreak when the fatal truth was realized when the body of the victim was found at nine o’clock (9:00 am) in the morning yesterday after the lifeless body was washed ashore at Nila Hospital beachfront.

The victim child was traveling with her mother along with their newborn daughter, and the older adopted daughter boarded the ship when the tragic incident occurs.