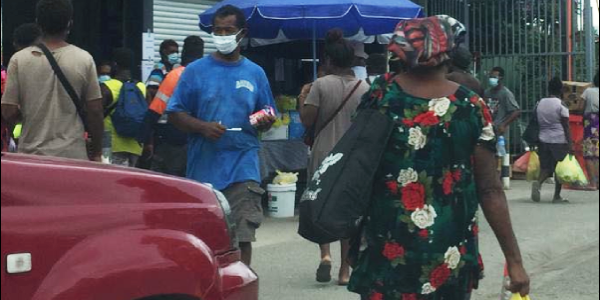 PANIC-BUYING has hit Solomon Islands’ capital, Honiara, in response to a 60-hour lockdown declared by the Government early this morning.

Traffic in some places is on bumper-to-bumper as people rushed to markets and shops in never-before-seen fashion. The main Honiara Market became a ghost market by 1:30pm today as panic buyer emptied usually busy market.

As well, there are long queues in front of shops as panic-stricken individuals rushed to stock up for the next two and a half days. The 60-hour lockdown starts at 6pm tonight.

Commercial banks in Honiara too have closed their doors early, leaving many customers disappointed and angry. At the Bank South Pacific, the largest of the three commercial banks in Solomon Islands, customers were, without warning greeted with a notice pasted across its entry door the bank is closed for business as of 12noon today until further notice.

As disappointed customers left, some said many families would go hungry for the next few days.

“The Bank should at least remain open until 2pm because the declaration of the Honiara lockdown took everyone by surprise,” one customer said.

At the Solomon Power Head Office at Ranadi, there is also a long queue outside as customers rushed to buy enough cash power credits for the next two-and-a-half days.

Fuel stations as well as Solomon Water could be next in line for long queues.

The Lockdown has also affected commercial ships, which left Honiara in the last day or two.

East Kwaio’s Constituency ship, the Landing Craft Gulatatae, which left Honiara on Tuesday, was reportedly ordered to stop its journey halfway to the Constituency. It was at Afio in Small Malaita on Wednesday and its passengers have reportedly been told to disembark, according to information obtained by Solomon Star.

Other passenger ships that left Honiara in the last two days too could be affected as the government tries to deal with what it feared most, community transmission.

The Government declared the Lockdown for the capital following reports that a resident at the seaside settlement of Mamana Water near the National Referral Hospital had contracted the COVID-19 virus.

The individual has since been admitted at the National Referral Hospital.

Honiara – a bustling seaside township of an estimated 160, 000 residents – is the second in Solomon Islands being declared a lockdown zone.

The first is Pelau on Ontong Java in the Malaita Outer Islands (MOI) where six cases of the deadly virus have been detected. The Government has declared the area “a No-Go Zone.”

Confusion still surrounds the timing of the Lockdown in Honiara. It would seem the 60-hour Lockdown would be lifted by 6am on Saturday January 22. Repeated calls to the Office of the Prime Minister yesterday were not taken.