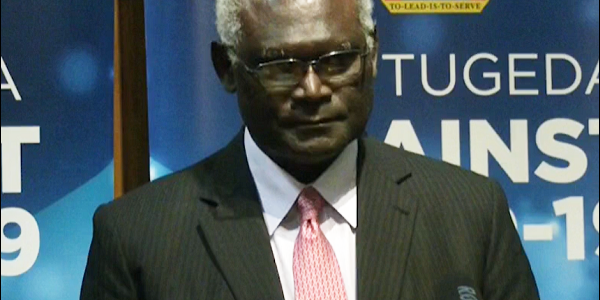 In the open vote in Parliament yesterday, the Government polled 32 while the Opposition which filed the motion of no confidence a week ago received just 15 votes. There were two abstentions.

Malaita MPs in Government, whose support was relied on never voted with the Opposition. Two that did, abstained.

They are the MP for Baegu Asifola and the MP for Fataleka. And there’s claim they may lose their positions as ministers within the government.

Hon Wale outlined issues, which he said justified the call for Mr. Sogavare to step down.

Former Prime Minister and MP for Small Malaita, Rick Houenipwela picked up from where his boss left off in remarks punctuated by anecdotes of “lack of leadership” in addressing the nation’s financial woes.

“He has a track record. He’s capable of even throwing China out the window if someone else comes along and offers something better. Solomon Islands cannot afford another period of his leadership.

“To vote against the motion Members would be abetting his self-serving attitude,” Hon Houenipwela said.

Mines and Energy Minister and Deputy Parliamentary Leader of OUR Party Bradley Tovosia also spoke in defence of his leader.

“The very things you accused the Prime Minister you did too when you were there. I have evidence,” Hon Tovosia said.

Former Prime Minister Danny Philip who opposed the motion said if Members of Parliament had evidence of corruption, the court is where to go.

He also clarified the issue of diplomatic switch to China – the issue which had ignited what had led to the rioting, looting and burning of business districts in Honiara last week.

The Minister for Health and Medical Services, Culwick Togamae also spoke against the motion, arguing its passage would set bad precedent.

“It would mean anyone who is not happy with the national government would simply walk in and start burning Honiara. They would see such as an opportunity to exert their influence and power over others,” he said.

Dr. Togamae said he declined a request by Chiefs from his Constituency that he steps down from the DCGA Government for the very reason of precedent.

In his response Prime Minister Manasseh Sogavare denied all allegations leveled against him by the Opposition side.

He said many of these allegations are serious and evidence should be provided to prove them.

Malaita Premier Daniel Suidani was quick to point out that the defeat of the motion was not the end.

Mr. Suidani said what happened in Honiara was the result of a government which never listened to the concerns of the people

“It’s an honourable thing to do,” he said, announcing a referendum of sorts or survey would be undertaken to find out who supports Malaita autonomy.

“No one will arrest you – you just tick yes or no in the boxes being provided in the form,” Mr. Suidani said.

He said members of the M4DD (Malaita for Development and Democracy would undertake the survey between now and January 30.”

Mr Suidani also told a small crowd that gathered at the Auki Market yesterday to watch the no confidence motion debate that he had written to the Secretary General of the United Nations Security Council to investigate why the terms of the Townsville Peace Agreement were not honoured.

It is questionable whether the UN Security Council would be obligated to respond as the request is deemed to be outside UN Protocols, which allow dealing with UN Members only not provinces.