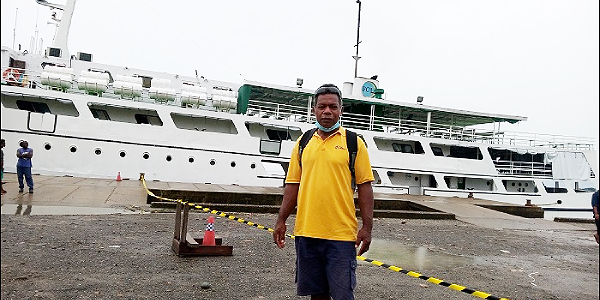 A PASSENGER who traveled back on the first repatriation from Honiara to Western Province has thanked the Repatriation Local Organization Committee (LOC) for the effort in organizing the trip.

The trip left Honiara on Tuesday night and arrived in Gizo on Wednesday night.

Speaking to Solomon Star Gizo yesterday, Paul Nason, who is also a school teacher by profession said he is so happy to be finally home.

He therefore thanked the repatriation organizing committee for their hard work and tireless effort in ensuring all the stranded residents were able to return to their respective homes and communities.

“As a stranded passenger who was stuck in Honiara for nearly two months, I would like to thank the LOC Team especially Moffat Maeta, David Boseto and Derald Michael for the hard work and tireless effort by pushing this issue over to the Oversight Committee and the Western Province Government (WPG) for approving the repatriation trip.

“Without their support, there will be no such arrangement,’’ he said.

He added in this kind of situation, it should be the Members of Parliament (MP) who should be responsible for their people to assist and support.

”Above all thanks to the overall support from the Western Provincial Government (WPG), the Provincial Disaster Committee (PDC) and the National Oversight Committee for the tremendous job in making sure their people are returning back to their homes,’’ Mr. Nason said.

About 400 stranded passengers boarded MV Fair Glory on that trip.

Most of the passengers got off at Seghe, Noro and Gizo.

On arrival they were swabbed. Most of them tested negative and were able to travel to their respective homes, villages and communities.

The return trip is expected to repatriate some of the stranded passengers in Western Province back to Honiara.

MV Fair Glory is expected to arrive in Honiara today.

Western Province is the only province that has arranged a repatriation trip so far.