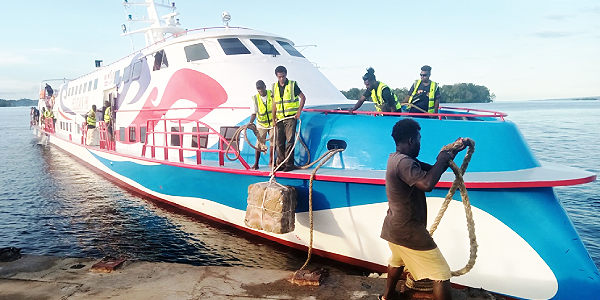 EXCITEMENT and expressions of jubilation echoed through Gizo harbor as ‘MV Pelican 96’ successfully made its first mid-week trip to the Western Provincial capital main Gizo wharf on Wednesday evening.

A sizeable number of people turned up to witness its safe arrival to mark the start of its twice weekly trip to the province.

This week’s trip marked its first successfully trip to Gizo after the maiden trip last month failed to berth at Gizo after it ran aground.

After undergoing repair works it was able to resume services.

Its arrival marked the estimated ten hours journey from Honiara to Gizo.

Its second trip will on Sundays.

Following its arrival in the country in August, Pelican 96 had been serving Auki, Malaita Province.

Few months ago, operator Pelican Shipping Limited (PSL) announced its schedule for the Western Province, giving the traveling public so much excitement because it offers a much better choice for the public to travel in comfort and style.

And to see the boat finally arriving at Gizo this week was exciting for many people in the province knowing that the operator is committed to serve the province.

A handful of passengers made it on the trip which left Honiara at 8am in the morning and by 5.45pm it arrived in Gizo.

Even the owner of the boat was on the trip and appeared to be looking happy.

When approached for an interview he referred the Solomon Star to the captain.

Given the fine weather, the trip was very enjoyable of them.

Wednesday’s trip to six of the main ports in Western Province namely, Bunikalo, Gasini, Seghe, Ughele, Noro and Gizo also marked the start of a twice weekly service to be operated by the Pelican 96.

For other normal vessels, like Fair Glory, Fair Lady and Marina II it took more than 24 hours to travel from Honiara to Gizo.

But this fast craft had reduced traveling time for the public.

With the festive season fast approaching the traveling public will soon a better choice to travel in comfort and style.

The calm sea had also offered a good ride for the passengers who boarded the vessel.

The fast craft will operate its weekend on Sunday departing Honiara 8am to all Western ports.

According to one of the captains onboard about 15 crew members were part of the trip this week.

He said, there are three engineers and three captains.

The boat can travel up to a speed of 31knots but because the ship is not full, the boat only traveled at 27 knots.

“When the boat is at full capacity, we can travel at its maximum speed,” the captain said.

Following the recent incident in Gizo, new captains have been replaced to get the boat down to West.

As the boat approached Nusatupe Gizo residents came out to watch as it makes it way into the harbor.

Many were excited that it had made it through this time.

The Solomon Star had tour inside the boat which has a VIP area and business class at the top deck.

At the bottom deck there are two economy classes.

The boat is fully airconditioned.

Pelican 96 was specially designed and built in Asia for the country’s ocean.

The boat can carry about 396 passengers and has a business and economy classes.

With the festive season and New Year break coming up, many travelers are excited with the start of the service.

Mahe Tolipio, a Gizo resident who witnessed the arrival of the boat said, the latest inclusion of Pelican 96 into the province will see the route now being competitive as the festive session approaches.

“The inclusion of Pelican 96 now on this lucrative route, would offer more options for the traveling public and those who wish to travel fast with less luggage to carry.

“Having fast craft on the route it would allow people to travel in comfort and much faster rather than by air which is costly,” he said.

‘Pelican 96’ was acquired by August as part of its expansion in the shipping services and to provide a better option for the traveling public between Malaita and Western provinces.

The new service will also offer an option for tourists to travel to the province while enjoying the beautiful sceneries and view along the way.