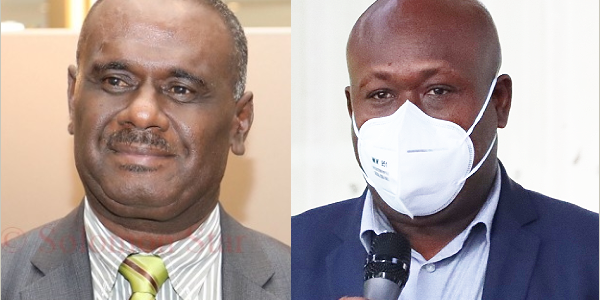 The two Ministers used the occasion to update PIF Secretary General on the implementation of Solomon Islands National Security Strategy provided for under the 2018 Boe Declaration. Secretary General Puna welcomed and appreciated the face-to-face interaction on Solomon Islands security concerns and offered the region’s premier institution assistance in addressing some of these concerns.

In his remarks Secretary General Puna welcomed the outreach of Solomon Islands to the Secretariat. Foreign Minister Manele, highlighted that contrary to certain views expressed recently in the media, Solomon Islands as a member of Pacific Islands Forum stands ready to clear any misconceptions regarding action taken by the government in addressing the country’s domestic hard and soft security concerns.

Minister Manele stated that Solomon Islands remains supportive of regional security frameworks including the 1997 Aututaki Declaration, 2000 Biketawa Declaration and the 2018 Boe Declaration. All of these speak of respect to each PIF members’ sovereignty and the need to develop a National Security Strategy that seeks to address individual countries’ security concerns. Minister Veke also confirmed that Solomon Islands has in place National Security and Border Strategies. Solomon Islands calls for more partnerships to address the range of security risks facing the country.

The delegation met at official level with Melanesian Spearhead Group and with Pacific Small Islands Developing States ahead of the regional Foreign Ministers Meeting. Solomon Islands delegation welcomed the sub regional and Pacific SIDS expressed support and solidarity on issues of peace and security in the region, in particular action taken by Solomon Islands on rolling out its National Security Strategy.

The two ministers reiterated that the focus of Solomon Islands going forward is to strengthen the capacity and capability of its security enforcement agencies to be able to confront any future risks and threats.