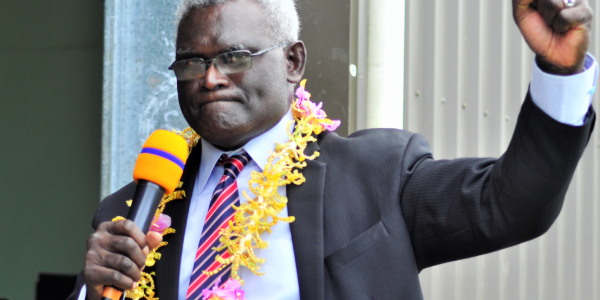 Prime Minister Manasseh Sogavare has acknowledged God for leading what he described as an infant nation Solomon Islands to another independence anniversary- the 44 Independence Anniversary.

To formally acknowledge God and the heavenly hosts for leading the nation, a ‘Thank giving Service’ program was held at Maranatha Hall in East Honiara.

Prior to the service, a float parade was convened early in the morning from White River to Maranatha Hall.

In his speech Prime Minister Sogavare said as a Christian nation, Solomon Islands was duty-bound to acknowledge God for his kindness and guidance which led the country to where it is today.

“Forty-four years ago, we were granted independence,” he said.

“Looking back over our journey of 44 years, we’ve got everything to thank God for.

“We nearly broke up as a nation, but God guided us through,” he said.

Prime Minister Sogavare said the thanksgiving service was to acknowledge God’s faithfulness to Solomon Islands as a nation.

Mr Sogavare said as the prime minister, he ought to thank God for his ‘sufficient grace and protection’ over Solomon Islands.

“…44th years ago, today (yesterday), we had political independence from Great Britain.

“…we don’t fight for it, it was virtually given to us,” he said.

“How many of us Solomon Islanders have meditated on the lyrics of our National Anthem?” he questioned.

Prime Minister Sogavare said our national anthem was selected out of many songs submitted because it is a prayer.

He also acknowledged the founding fathers of the nation for their contribution to Solomon Islands nationhood.

The Prime Minister also took the opportunity to highlight Solomon Islands rapid high population growth rate which he said is one of the biggest challenges facing the country’s development growth.

He also pointed out social cohesiveness, finance and leadership as other major challenging issues facing the country.

“…we have to move to the positive side of everything that has happened to our country,” he said.

The Prime Minister also took the opportunity to thank the country’s donor partners’ foreign diplomatic missions in Honiara, business owners and all other stakeholders as well as Solomon Islands citizens for continuing to support the growth of the country in the past 44 years.