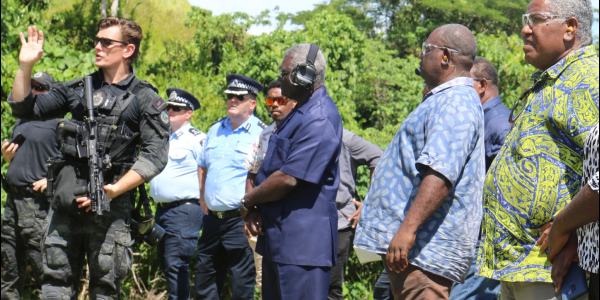 PRIME Minister Manasseh Sogavare and a number of his cabinet ministers on Friday 17th December attended a weapons capability demonstration hosted by the Australian Federal Police.

Held at the Tenaru Rifle Range, the demonstration comprised the following phases;

Phase one is a public order simulation that demonstrates less lethal weapons, and then after a proclamation, the use of lethal force against a target.

The second phase is a practical demonstration and display of weapons.

Third phase is a controlled demonstration of the M4 5.56 mm weapon varied by the AFP SO operatives in Honiara.

The demonstration is to show how the 5.56 mm rifle capability will be incorporated into the PRT next year.

This follows the successful delivery of the 5.56 mm rifle program as part of the RSIPF Phase II rearmament.