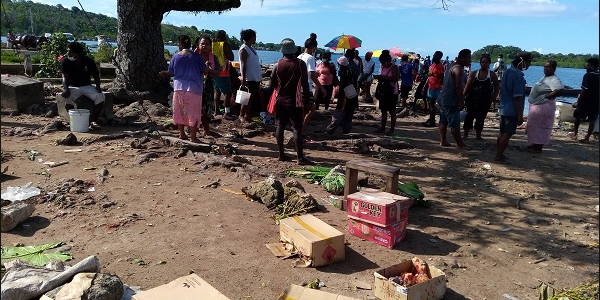 GIZO Police over the weekend raided the illegal market spot at the KHY Buni Tree market and confiscated all the items.

This came after disobedient vendors continue to defy the order not to sell in a public spot in light of the COVID outbreak.

During weekend the main Gizo main market is closed. Therefore most of the vendors used the KHY area to sell their market produce, fish, betel nuts, cigarettes and other products.

Without any warning Gizo Police Officers arrived and confiscated all their items.

Many of them vendors were unhappy with the action taken by the police because of the struggle they are going through to make ends meet to support their families.

However, police said the order not to sell in a public spot has already been issued.

A female betelnut vendor from Nusabaruku said she lost everything during the raid. She said the sales was supposed to feed her family.

She further claimed the officers also confiscated her takings.

Another betel nut from Vella said she is unemployed and they only way to earn an income and support her family  is to sell betel nuts.

“During this pandemic, things have changed, we are the ones facing the odds,” she  added.

Most of the market vendors further claimed a female Police Officer also said an insulting word to them.

A betel nut vendor was also arrested and was remanded in the Police Cell.

Following the incident the vendors staged a peaceful march down to the MSG complex from KHY Buni tree.

The vendors were later advised by the Premier of Western Province to calculate the cost they lost and their the matter will be dealt with accordingly.

Its  understood many announcements and messages were issued by the Premier himself and the Western Provincial Disaster Committee (PDC) since last month  but betel nut vendors fail to listen.