PREMIER MAKAÁ URGED COCOA AND COPRA FARMERS TO STEP UP 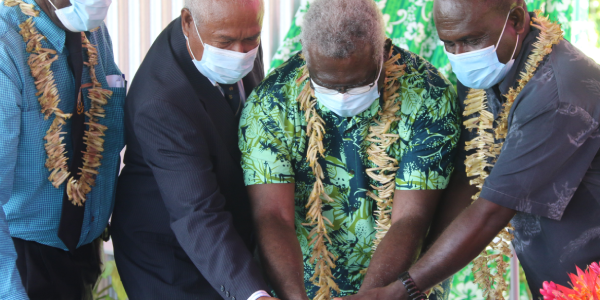 The Premier of Makira Ulawa Province has challenged cocoa and copra farmers of the province to continue to maintain their plantations now that a buying center is established.

Premier Julian Makaá made the call during the opening of the Pakera buying center last week at Pakera, Central Bauro, Makira Ulawa Province.

Makaá stated that the Province is amongst the highest producers of cocoa and copra, and the establishment of the buying center is timely and a move in the right direction.

The Premier also spoke highly of the revitalization and recapitalization strategy of the Commodities Export Marketing Authority (CEMA).

Premier Julian Makaá said reviving CEMA to be the conduit for cocoa and copra farmers is important as they are the drivers behind the two mainstay of our economy namely cocoa and copra.

The Premier urged farmers to do their part as the government through CEMA has done theirs in the establishment of the buying center.

Minister of Commerce, Industry, Labor and Immigration (MCILI) Fredrick Kologeto also made the call on Makira Ulawa farmers to step up their cocoa and copra production.

Minister Kologeto emphasized that the ministry will continue to assist CEMA to ensure that CEMA thrives in its endeavor to promote and maintain the cocoa and copra industry.

Kologeto said the manifestation of the ministry’s assistance for CEMA can be seen in this year’s national budget where the ministry allocated $2 million dollars to CEMA.

Kologeto highlighted that such financial help will continue until such time CEMA is proficient in delivering its aims and objectives.

Mesepitu said propping up CEMA is a longtime wish for many farmers as copra and cocoa have been the cornerstone of our economy.

The PS further joined others to congratulate the government for realizing the vision to bring back copra and cocoa to their glory days, adding that it will not be an easy feat but a start is the way forward.