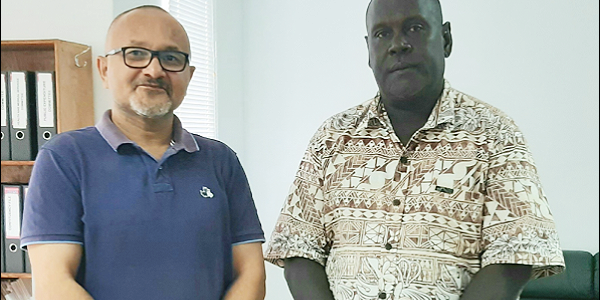 Newly elected Premier of Western Province, Hon. Chris Mesepitu on Monday held a courtesy visit to the Leader of Opposition.

According to the Premier, it was proper that he staged the visit in appreciation for the support given by the Opposition group for the Provinces and their respective governments.

During the brief roundtable talk, the two leaders cordially discussed some of the key issues that Premier Mesepitu and his new executive felt needed immediate national attention. One of the main issues discussed between the two Leaders was the need for more devolution of powers to Provinces.

The two Leaders agreed that the values of partnership and unity must be pursued in order for this Country to move forward.

This is not the first time these two leaders have met, as the two held a similar but longer meeting during one of the Opposition Leader’s visit to the Provincial capital, Gizo in 2019. During that visit, Mr. Mesepitu was still Deputy Premier.