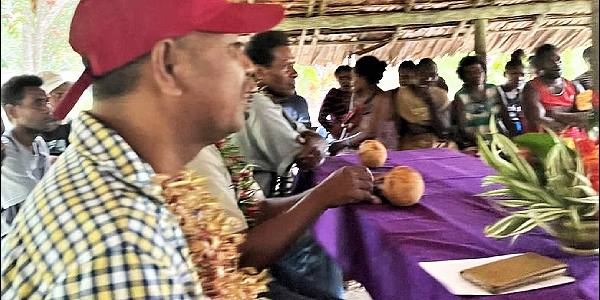 A TEAM from the Malaita Provincial Premier’s office last week held talks with customary landowners of the proposed site that will house the USAID SCALE Project at Gwaigeo near Auki.

A statement released from the Premier’s office last week stated that Premier Suidani and his team met with landowners of Fiu and Gwaigeo under the Kelakwai Land Settlement Area this week.

The meeting was held successfully after the Ha’alau tribal group requested the office of the Premier for a discussion regarding the proposed development under the USAID SCALE project earmarked for Gwaigeo.

According to a statement from the Premier’s office regarding the meeting, it stated, “The meeting was aimed at seeing how the tribal group could be part of the proposed development at Gwaigeo.”

The issued statement further stated, “It was a successful meeting where the tribal group expressed their continued support to such developments as they have done with developments in the past.”

The statement concluded by saying, “The premier expressed his gratitude towards the group and encouraged them to continue working together with the tribe.”

Prior to the meeting at Gwaigeo last week, Premier Suidani and his team also visited resource owners from other proposed sites that will house the USAID SCALE project in North Malaita, East Fataleka, and East Malaita at Atori.