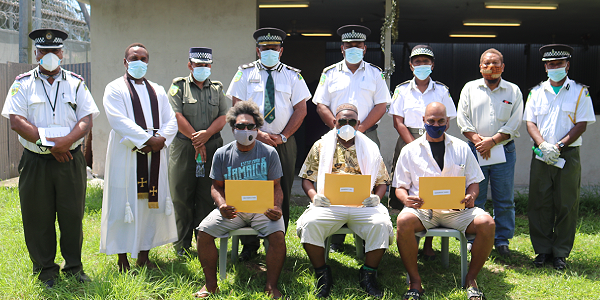 SIXTY five inmates were granted early release on Friday due to concerns susceptible to COVID-19 outbreaks given the overcrowding situation in our correctional centres.

He said with the widespread community transmission of COVID-19 Delta variant across the country, custodial environments are susceptible to COVID-19 outbreaks given the confined conditions and potential for overcrowding.

He said given this situation and the vulnerable position CSSI, in particular our Correctional Centres finds itself in, in trying to provide a safe and secure environment for both officers and inmates to work and live and the very limited infrastructure to support the COVID-19 safety practises and protocols, the CSSI had to recommend the early release of these inmates.

The inmates identified for early release were considered based on the following;

“…the release of these recommended inmates will assist greatly in alleviating the current pressures being encountered in the centre with regards to high density of inmate numbers in most units and assist in being able to mitigate the possible introduction of COVID-19 into the centre, through the decrease in overall numbers and providing space to strategize future management options, such as isolation areas for inmates identified as at risk,” Mr Manelusi said.

“…we already have a significant number of officers who are unable to participate in official duties because of testing positive to COVID-19.

“Presently there has been a need to mobilise all official hour’s duty officers based in CSSI Headquarters (HQ’s) and place them in shift duties to RCCC.

“This leaves the agency significantly exposed in many areas of the operational and administrative functions, but we are managing as best we can presently, including continuing to provide support to quarantine and RSIPF combined operations,” the Commissioner said.

The release of the inmates was endorsed by the Minister of Police (MPNSCS) Anthony Veke, after he received instruction from the Attorney General Chamber’s office.

Mr Manelusi said these inmates are recommending for early release in accordance with the Correctional Service Act and Regulations 2007 -2008, in particular Regulation 198 which states:

“Upon the recommendation of the Commissioner or the Parole Board, a convicted prisoner may be granted remission of the whole or any part of a sentence at the discretion of the Minister. In exercising the discretion, the Minister may consider the age, good conduct, mental or physical health and any other special circumstances of the prisoner.”

On Friday an Early Release Program was organised with a thanksgiving service was held for the parolees and early releases at Saint Paul’s Chapel at Rove Central Correctional Centre in Honiara.

The service was coordinated by Chaplain Inspt Fr. Reginald Tohutohuniu

Mr Manelusi urged the parolees and early release inmates to comply and abide with their condition of release.

Among those released are two women.