PS accused of plotting against Suidani 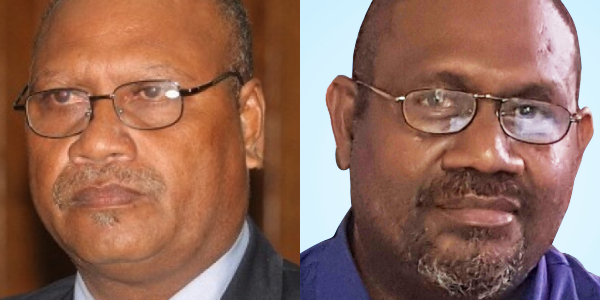 Solomon Star was informed that before the second motion of no confidence against Mr Suidani, the MPGIS permanent secretary Stanley Dick Pirione was in Malaita holding a meeting with members of the provincial opposition group.

The meeting was held at Shad’s Hideaway – a place in the heart of Langa Langa Lagoon.

According to a source within the Malaita Provincial Assembly, Mr Pirione gathered members of the provincial opposition and the provincial government at Shad to discuss how to remove Mr Suidani from power.

He informed the provincial members that the Democratic Coalition Government for Advancement (DCGA) did not want Mr Suidani as premier of Malaita Province.

He persuaded those who attended the meeting to tender their resignation from Mr Suidani’s government.

Mr Pirione’s colleague from the MPGIS also attended the meeting.

“The PS told those of us who attended the meeting that everything will be laid on the golden plate, all we need is to obey as the national government is behind the move,” the source told Solomon Star.

The source said what Mr Pirione didn’t know was that some of the provincial members who attended the Shad meeting did not support the move to remove Mr Suidani from power even though they show support to Mr Pirione.

He said after that meeting some of the MPA (Malaita Provincial Assembly members) attended a secret meeting with Mr Pirione who gave each of them $10,000.

“The money was believed to have come from DCGA government as upfront payment with more money promised as reward if the mission to oust Mr Suidani is successful,” the source said.

All these happened when Mr Suidani was away on a medical trip in Taiwan.

In his absence, the deputy premier then Randol Sifoni was the acting premier for the province.

When Guadalcanal Province celebrated its 2nd Appointed Day in Marau, Mr Sifoni and the provincial member for Ward 11 Elijah Asilaua were invited to attend the ceremony.

The duo later joined the Prime Minister and his delegation to attend the Makira Ulawa Provincial Appointed Day last year.

The source said it was during these two events that Mr Sifoni and Mr Asilaua met the Prime Minister, DCGA government ministers and backbenchers and tasked with the mission to oust the Suidani led MARA government from power.

The source said upon Mr Sifoni and Mr Asilaua’s return from the two provincial trips, Mr Sifoni has changed – causing a political rift within the MARA Government camp.

“Premier Suidani will say one thing and his acting premier Mr Sifoni will say another thing,” the source said.

A public statement was issued by the national government on behalf of Mr Sifoni that it has laid the foundation for the move.

This led to a mass resignation of MARA government members which the MPGIS quickly and willingly facilitated without delay.

However, when Mr Suidani appointed new ministers to replace the outgoing MPAs, MPGIS refused to facilitate the appointments.

In a statement yesterday, the Ministry of Provincial Government and Institutional Strengthening denied participating or trying to orchestrate the Motion of No Confidence against Premier Suidani.

“At no time, we discuss ways to remove the premier.

“That is a matter for MPAs themselves.

“Despite these upheavals and political wrangling, the personal relationship between Premier and MPGIS remains cordial and intact.

“Only issues with regards to abnormality or contentions with the PGA (or any other laws) were clarified or explained to MPG and Premier,” the statement said.

Members of the provincial opposition group denied receiving any bribes leading up to the Motion of No Confidence.

But one Malaita Provincial Assembly member from the provincial opposition confirmed to Solomon Star that he received $20,000 of bribery money to oust Premier Suidani.

The source said reports of these bribes forced members of M4D to confront Mr Pirione and other government officials in Auki when the delegation visited Malaita Provincial Government for dialogue late last year.

The statement from MPGIS yesterday said the permanent secretary and MPGIS truly acknowledged the threat done by M4D members when he visited Auki.

He has explained everything to their leaders and they seemed satisfied with his explanation.

Further to that, he has remained at Auki during the months of December 2021, January 2022 and February 2022 but has received not a single threat from anyone.

He even went to East Fataleka (his grandfather’s place) during the Christmas season and yet received no threat from anyone.

“That means, there are no issues at all between him and any members of the former M4D,” the statement said.

Premier Suidani is the first Malaita Premier to face two motions of no confidence within his time in office.

Premier Suidani’s downhill relationship with the national government started in 2019 when he openly spoke against the DCGA’s decision to switch diplomatic ties from Taiwan to China.