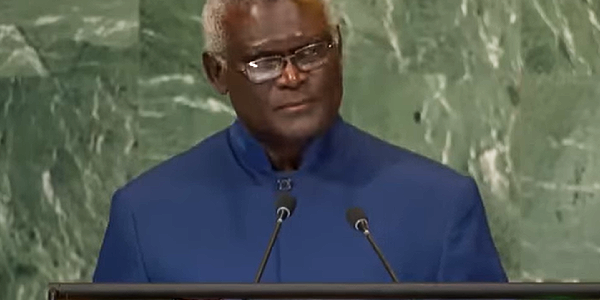 PRIME Minister, Manasseh Sogavare, has called on the international community to respect Solomon Islands’ Sovereignty and Democracy, a call that comes just four days ahead of the United States President Joe Biden’s Summit with Pacific leaders at the White House.

In his fiery address to the 77th session of the United Nations General Assembly (UNGA) in New York two days ago, Mr Sogavare said Solomon Islands has been unfairly targeted since formalising diplomatic relations with China almost three years ago.

“We have been subjected to a barrage of unwanted and misplaced criticisms, misinformation and intimidation that threaten our democracy and sovereignty. Solomon Islands has been vilified in the media since establishing its relationship with China.”

Prime Minister Sogavare, a once staunch advocate for Taiwan’s longstanding bid for admission to the UN at the UN podium in the past, accusing the world body of hypocrisy for ‘violating its very own founding principles by suppressing the unalienable rights of the people of Taiwan to sovereign recognition’ told the UNGA that the decision to switch ties from Taipei to Bejing is consistent with the 1971 UN Resolution 2758.

He said the right to establish diplomatic relations between sovereign nations is a universal principle shared by all members of the UN.

The Prime Minister said the decision on the diplomatic switch was reached through democratic processes by a democratically-elected government. “It is consistent with the UN Resolution 2758 of 1971 observed by most countries of the UN and which also articulates the One China Policy that Solomon Islands respects,” he added.

He said Solomon Islands has adopted a ‘Friends to All and Enemy to none’ policy and that in implementing this policy, it will not align itself with any external powers or security architecture that targets Solomon Islands or any other sovereign country, or threaten regional and international peace.

“Solomon Islands will not be coerced into choosing sides. Mutual respect for national sovereignty, territorial integrity and non-interference into the internal affairs of any country is universal and paramount.

“As a sovereign nation, we embrace and zealously guard these principles.”

Prime Minister Sogavare quoted a statement the late president of South Africa, Nelson Mandela, made in an interview with a British-born American broadcast journalist, Ted Koppel, which he said was relevant to the situation of Solomon Islands.

“I am reminded by the wisdom conveyed by the late President Nelson Mandela during an interview with Ted Koppel which is relevant to our situation and I quote, ‘One of the mistakes which some political analysts make is to think that their enemies should be our enemies. Our attitude towards any country is determined by the attitude of that country to our struggle,’ end of quote.

“Solomon Islands has no enemies, only friends. Our struggle is to develop our country. We stretch out our hand of friendship and seek genuine and honest cooperation and we zealously guard this principle.”

Mr Sogavare also used the opportunity to call on all countries to exercise sensitivity so as not to inflame tensions in the Taiwan Strait.

“The Taiwan Strait is one of the world’s busiest trading routes used by international shipping. We call on all countries to be sensitive and not inflame tensions that can threaten the unity and security of any country.

“Any miscalculation could threaten international peace and security, and could have disastrous consequences on global trade.”

Whilst welcoming the Biden-Pacific Leaders’ Summit, some Pacific leaders are skeptical of the US’s-self-acclaimed ‘deep and enduring partnership’ with small Pacific island countries.

Political analysts view the summit as a desperate attempt by Washington to reverse Beijing’s diplomatic inroads amongst the islands powered by decades of economic and development aid that threatens to render the US regionally irrelevant.

Its decision not to invite the PIFS could begin to work against the United States in particular in rebuilding relations with the Pacific region.