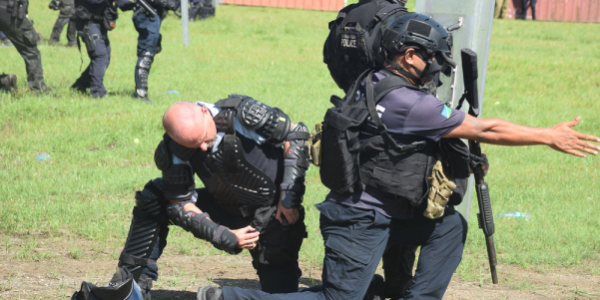 The Royal Solomon Islands Police Force (RSIPF) and Solomon Island Assistance Force (SIAF) are stepping up their training in riot equipment for the scheduled resumption of Parliament meeting next Monday.

Commissioner of RSIPF Mr Mostyn Mangau in a statement issued by Police Media Unit said, “The training happened at the Rove Oval with different scenarios being conducted to test the police capability should there be any planned protest during the meeting.”

Commissioner Mangau said during the Parliament sitting there will be heavy police presence in some of the strategic locations in Honiara City and some checkpoints will be erected to manage people movements during the meeting.

Mr Mangau appeals to the good people of Solomon Island to stay out from any planned protest during this parliament meeting.

He warned: “Police will deal with anyone seriously if arrested. And I also appeal to business houses to continue with your business as usual.”

He expressed gratitude that SIAF had additional members from Australia and Papua New Guinea (PNG) who have arrived in Honiara to support the RSIPF.

That POM training included members from: