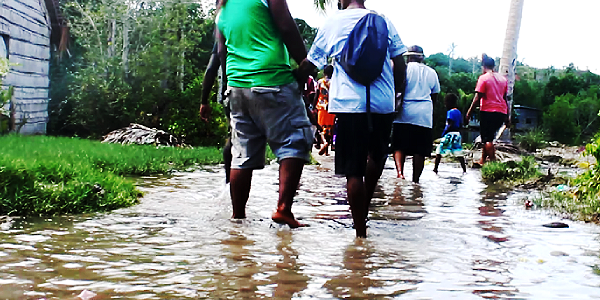 PEOPLE of Nusabaruku community outside of the Gizo township in the Western Province are seeing abnormal tides reaching further up to their homes and are hoping to be given help to legitimately relocate.

With the ongoing impacts of sea-level rise due to climate change, people of Nusabaruku community are contemplating whether to build seawalls to protect their community or simply abandon it for higher grounds.

A visit by the paper to Nusabaruku village showed that a lot of changes had occurred along the coastline in front of the community.

Speaking to this paper in an interview with the Solomon Star, Gizo, a youth living at the Nusabaruku seaside, Charles Kantesie, 21, said that since they were hit by king tides late last year and early this year, they noticed great changes in the tides.

“The high tide usually occurs early in the morning and late in the evening. The tides reach further in land into the community and  as far as the road.

“It is getting worse because the tides even reach as far as our kitchen huts which are built on flat ground.”

Young Charles fears that as time goes on, the tides will eventually cover the community and they will have to relocate somewhere.

Sika Ereta, a woman who also resides at coastal side in Nusabaruku said, “One of the flat areas we used as our volleyball court submerges whenever there is high tide.

“The tides even reach the slab of the community’s new water stand-pipe that was built few years ago.

“We do not know what to do. We are used to living here and we will remain here until the situation gets worse.

“A number of families have moved out and settled on higher grounds,” Ereta said.

Nusabaruku Community has over 3000 plus population currently which is dominated by Micronesians- descendants of the Micronesians from the Phoenix group of islands who were resettled in the Western Province by the British during the British Protectorate rule over Solomon Islands.

Many people from the community have relocated to the hills due to sea-level rise but others are hesitant to do so because they know the land is owned by the Western Provincial Government (WPG).

This paper understands that whilst the WPG has plans to relocate people from the Nusabaruku community and people from other coastal communities to higher grounds, it has said nothing about their implementation.

The hesitant ones are doing all they can to keep the tides away by building seawalls using rocks.  But how long they will manage to keep out the tides is anyone’s guess. It is a dauting task and the people of Nusabaruku Gizo are hoping that relevant authorities will help them secure land through the legitimate process to relocate.