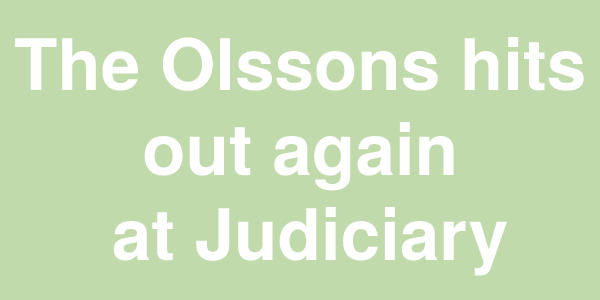 The Olssons hits out again at Judiciary

AUSTRALIAN couple, Fred and Gloria Olsson have reacted angrily to a letter from the Deputy Registrar of the Court of Appeal, requesting a $50, 000 security-for-costs in their case to be heard by the Court of Appeal for the second time.

“We can only but express our disappointment that we are being asked to place a substantial security bond with the Court to Appeal a decision, the enforcement order which has already been determined in our favour by the Court of Appeal in 2018.

“Our legal advice here is that we are owed many millions of dollars by way of judgment debt, interest and costs and should not have to pay a single cent [more] to have the matter heard yet again by the Court of Appeal,” Mr. and Mrs. Olsson said in their letter earlier this week.

The letter was addressed to a Thompson Mae, Deputy Registrar of the Court of Appeal. Mr. Mae had earlier written to the Olssons, confirming he had filed the appeal in the Court of Appeal in the case, CAC 19 of 2021: William Frederick Olsson and Gloria Olsson V Solomon Time Limited (in liquidation) & Pamela Kimberly – Security for Costs.

Businesswoman Kimberly was never asked to pay a security-for-costs deposit, when she, through her lawyer and former business partner John Sullivan QC, applied to the High Court to stay the execution of the Court of Appeal orders, which were given in favour of the Olssons.

Kimberly’s application was granted within 48 hours of lodging the appeal on 8th October 2018. The appeal is considered by lawyers as totally unprocedural as the High Court was never an appellant court.

That same treatment was never given to the Olssons who have complained consistently about their certificate of urgency or application being ignored by the High Court.

Writing to Mr. Mae, the Deputy Registrar of the High Court, the Olssons said in their latest complaint:

“Furthermore, we ask you to determine the Notice of Motion immediately, as it would be inequitable to expect us to pay more money for a case that has been concluded and reached finality in 2018.  Please respond to our email of yesterday as well, the Court of Appeal should be able to quash Justice [John] Keniapisia’s orders immediately as void and of no legal standing – the application he insisted on hearing was, in all but name, an Appeal of another High Court judge’s order and a Court of Appeal decision allowing the enforcement order.

“In the special circumstances surrounding this case, including contempt of court, attempted bribery of $200,000, interference with Sheriff to stop performance of his obligation to the court, lack of jurisdiction of High Court in this matter, no security deposit should be requested from us.

“Your speedy response is requested,” the letter said.

Mr. Mae had earlier informed Mr. and Mrs. Olsson that:

“As per the above appeal, I hereby serve you with letter dated 30th September 2021, for Security for costs in this appeal.”

The amount being requested for the Security for costs in the appeal is $50, 000  – the second time the Court of Appeal to hear the case.

Meanwhile the Registrar of the High Court appears to have mislaid the Olssons’ Notice of Motion and Sworn Statement emailed to the High Court earlier this week.

In an email sent to Mr. and Mrs. Olsson last Friday, Myonnie Ann Tutuo wrote: “On another note, there is no filed copy of Notice of Motion and sworn statement on filed (file)”.