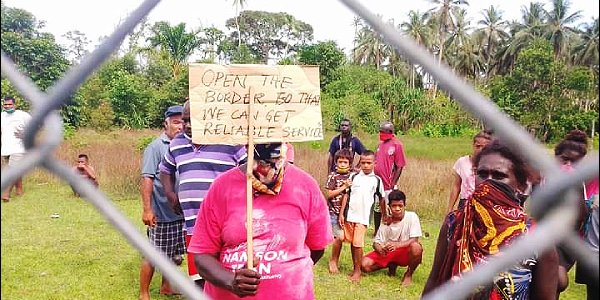 
SEVERAL communities in Shortland in the far end of Western Province have staged a peaceful protest on Monday over lack of access to services, lack of food and the need to reopen the border.

Reports reaching the paper said the protest came about after the livelihood of many families is at stake and the people are suffering.

It was revealed communities from Komaleia, Harapa, Laumana and Gaomai staged the protest led by women, men, youths and children.

During the protest that took place infront of the Harapa Police Station they displayed written slogans demanding their leaders and government to address their concerns regarding the need to provide services and supporting their livelihood through food.

According to an Elder from Gaomai village, he said it is true the government has put in place security measures at the border but fail to provide the people with reliable services to help and support them.

Peter Alisai said it’s a credit for the people because they have been working closely with the Government and the virus did not enter that way.

However he said, his people are in pain and suffer for almost a month.

“People at the border depend on their livelihood from the other side of the border.

“But with the closure of the border it makes our lives miserable and more difficult,” he said.

Another concern leader from Gaomai village facing Bougainville said it is unfair for them from zone 5 that they have been neglected with lack of a telecommunication tower.

He said communication is very important at this time and given the fact that they are facing Bougainvile.

“The Government must act now, we people down here really need essential services to be operational,” he said.

He added it is a great concern that needs attention for the responsible authorities to consider their welfare.

He said if this issue not addressed accordingly, people will still cross the border illegally to do trading and do things for their survival.

Meanwhile, over the weekend, some group members of Komaleia travelled across to Bougainville to purchase goods.

In Shortlands even a price of 1 kilo rice costs $40 dollars and a packet of sugar costs $25 dollars due to the shortage of cargo and fuel price.

It is understood, the Australia Government will fund and build six new telecommunication towers this year.

Four of the towers will be built in Shortlands to help ease their communication challenges.