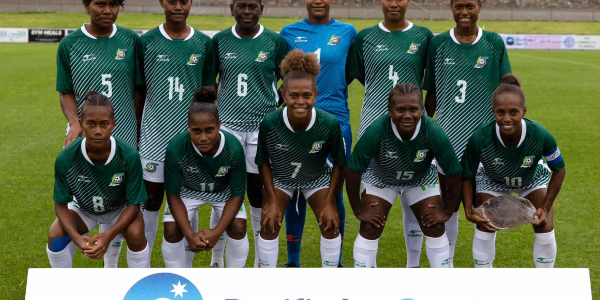 SIFF: Solomon Islands Women’s national team finish second behind Australia at the Pacific Women’s Four Nations Cup 2022 in Canberra after coming from behind to draw 1-1 with Fiji today at Seiffert Oval in Queanbeyan, New South Wales.

Solomon Islands started the match on the front foot showing an attacking flair which led to a opportunity presenting itself to 19-year-old Madeline Arukau who only has the goal to aim at but her attempt missed the upright.

Fiji took the lead late in the first half as Solomon Islands trail behind heading into the sheds at half-time.

Picking up from where they left off in the first half, Solomon Islands kept a solid backline to deny the Fijians and created some good attacking moments in the final third.

Just before the hour mark, Arukau draws level with her first international goal to equalize for Solomon Islands.

Captain Ileen Pegi went close late in the game with a drive outside the box while Almah Gogoni caused havoc on the right to create some good chances.

Shot stopper Margaret Kolefa was outstanding between the sticks to deny a second goal for Fiji with some brilliant saves.

The draw means Solomon Islands bagged four points from three matches, a win, defeat, and draw equaled with Fiji but secured the second spot with a superior goal difference behind Australia Young Matildas in the first position with six points. Fiji is third while OFC Champions Papua New Guinea bottom without a point.

Suri gives credit to his players for creating history after finishing third at the recent OFC Women’s Nations Cup in Fiji.

“I am pleased with the result today especially coming back from a goal down to draw with a strong Fijian side who beat us in the semifinal in the Nations Cup,” he said.

“Credit to the girls for sticking to our game plan despite playing against the wind in the second half. They worked together as a team and fight for every ball when Fiji is putting pressure on us in the last 10 minutes.

“To finish second in this international tournament is an achievement for Solomon Islands. I believe these girls will use this experience to improve as we continue to prepare for the Pacific Games back home next year”.

Suri also acknowledges the Australia Government through PacificAus Sports for inviting and hosting the team at the Australia Institute of Sports.

Captain Pegi said the team is progressing well after the Nations Cup playing against Australia and defeating PNG and draw with Fiji.

“I think we did ourselves proud for finishing this four-nations tournament behind Young Matildas,” she said.

“Women’s football is getting better in the region and seeing Solomon Islands in the mix makes me happy.

“We had a good experience playing against better sides like Australia, PNG and Fiji here in Canberra and this experience is good for us as we prepare for the Pacific Games next year.”

The team will leave on Tuesday for Sydney before flying out to transit in Nadi on Wednesday and returning home on Thursday.

Australia and the Pacific share a rich history and deep love of sport and, through PacificAus Sports, Australia works with Pacific partners to unlock this this potential further and create new opportunities for our athletes to train and compete together.

You can find out more about PacificAus Sports here: https://www.pacificaussports.gov.au