SICCI looks ahead after a Successful Influen-shell campaign 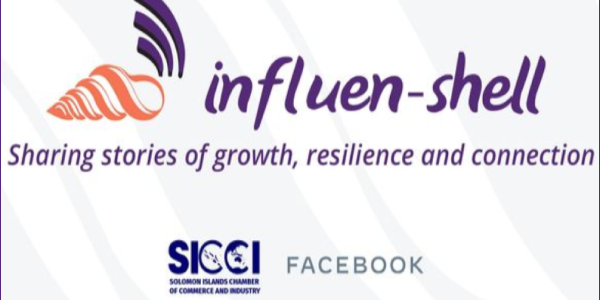 INFLUEN-SHELL is a social media campaign developed through a partnership between Meta (formerly Facebook) and the Solomon Islands Chamber of Commerce and Industry (SICCI).

A statement issued by SICCI Media Unit said it aims to promote local businesses in the Solomon Islands by sharing their stories of growth, resilience and connectedness, including through their use of digital technology.

The campaign highlighted 15 Solomon Islands businesses where social media users were exposed to a 5-week journey of inspirational narratives ranging from iconic established organisations to home-based entrepreneurs.
Natalina Hong, SICCI’s Chief Executive Officer (CEO), shared that the impetus for the campaign stemmed from government’s announcement of an impending prohibition of Facebook in the country.

“In early 2021, SICCI conducted a survey that strongly opposed a proposed government ban of Facebook. Due to the overwhelming response received from the business community regarding this plan of action, we then reached out to Facebook. In doing so, we hoped to establish collaborations and highlight the positive voice of businesses who depend on Facebook.

“This social media platform has become an integral part of life for many individuals and more so for those who engage in its daily for their survival. The Influen-shell campaign has clearly showed the capability and impact a single tap on a mobile device can achieve,” she explained.

The Influen-shell campaign celebrated Solomon Islands local enterprises and their employees, and showcased their diversity, adaptability, and innovation. As a result of Influen-shell’s accomplishments, SICCI is considering potential next steps.

“The success of the Influen-shell campaign are the businesses stories, compact but impactful and the feedback speak for themselves. We now want to continue building on this momentum. As the Solomon Islands are now in the middle of the COVID-19 pandemic, getting businesses to share stories, and highlight the crucial role in the country’s recovery is important.”

“Even more, is the motivation of individuals behind the businesses, who can also reach out to other islands in the Pacific where resilience has that powerful ability to link people and develop influential stories,”Ms. Hong added.