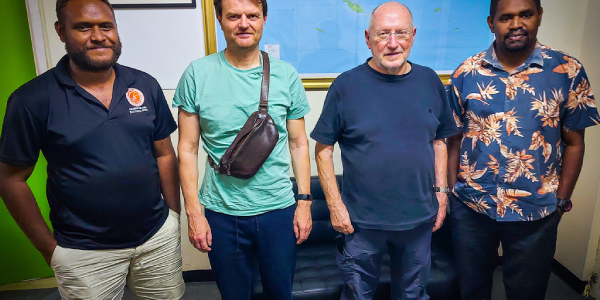 SOLOMON Islands Electoral Office (SIEO) has welcomed two IT Experts from the Electoral Services International Inc (ESI) who will join its team to commence on-site upgrades to the Biometric Voter Registration System (BVRS).

Work on the upgrade of the BVRS had earlier commenced with the off-site component which has been successfully completed. The arrival of the two IT experts marks the commencement of the second and final component which the on-site upgrades.

The upgrade to the BVRS system will include both software and hardware. This is to enable the Electoral Commission to deliver the next national voter registration exercise for the coming general election with systems that are updated.

One of the two IT Experts, Alex Gysel, reiterated the ESI commitment to support the SIEO in delivering the project.

Acting Chief Electoral Officer, Fredrick Bosoboe, welcomed the team on behalf of SIEC and offered his acknowledgement to ESI for its continued work and support.

“The system we have been using, both software and hardware, are near obsolete since 2013 along technological changes. It is only timely that we have an upgrade to the BVRS in preparation for the next national voter registration exercise.

“Not only that, with the improvements to our voter registration processes and services, newer modules needed to be imbedded in the BVRS,” Mr Bosoboe said.

The team will undertake the upgrades over a month period from October – November 2022.