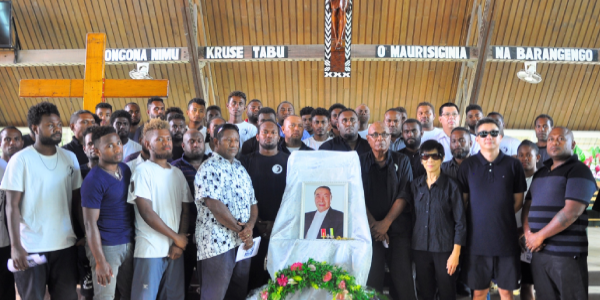 A DEVOTED father, a national hero and a legend to all is what Late Sir Moon Pin Literati Quan will be remembered for.

These were the sentiments highlighted yesterday during a memorial service for Late Sir Quan held at Holy Cross Cathedral.

The service was attended by Chief Justice Sir Albert Palmer and his wife, other dignitaries from the government, non-government organisations, members of the business community, family members and friends of Sir Quan who was called to rest on 30th August 2021 at Royal Brisbane and Women’s Hospital.

Sir Quan was born in Kirakira, Makira Ulawa Province on 23rd December 1943. He was the eldest of 10 children – seven sons and three daughters – of a Chinese trading family.

He was a devoted father, national hero and a legend to all as he was a Member of Parliament during the sixth parliament in which he was Minister of Agriculture and Primary Industries.

In the non-government sector, Sir Quan served as chairman of Solomon Islands Red Cross Society, an organisation he contributed towards greatly.

In his spare time, he involved in teaching martial arts. In fact, he was the grandmaster of Wing Chun Kung Fu School in Honiara.

His students were his pride and he treated them as his children.

He once told his children that “this is my world and I am not scared to change it for a better tomorrow”.

In their farewell message to their late father, Sir Quan’s children said: “Our father lived a full life and he loved all of us and he wished all of us the best each and every day.

“He would want every one of us to be happy and smiling.

“Our father will be missed by all of us.

“Father, we all love you so dearly.

“May you rest in peace and you will live on forever in our hearts.”

Ms Wendy Ho the secretary of Solomon Islands Chinese Association acknowledged with deep appreciation for the many expressions of love, concern and kindness shown to Sir Quan’s immediate family during this time of bereavement.

Late Sir Quan was 78 years old at the time of his passing.