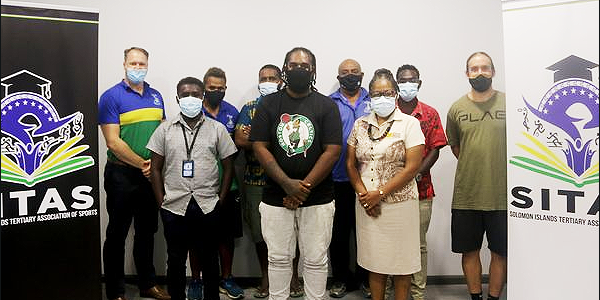 This was after a careful screening by the SINIS & SITAS screening board of the logo competition.

“Huge congratulations to Kurt Kuper for becoming the winner of the graphic design for the SITAS logo competition.

“Kurt Kuper has been awarded for his inspiration to come up with the design is the perception of students strive in both sport and education that trends unity,” the statement by SINIS has stated.

It added that more participants have competed in the SITAS logo competition over the past month.

With the winning logo now announced, it will be used as a legal art for SITAS, the statement said.

Star Sports understands that SITAS was revived around February 2022 by SINIS High–Performance program.

This was after some inactivity since its inaugural formation in 2019, with an aim to toward organizing and facilitating representation of all recognized universities and tertiary training institutions in the country that has an interest in sport programs for their students.

A statement by SINIS revealed that the High Performance program was partnering with national education institutions to re-establish SITAS.

A constitution has been agreed and reviewed following an Interim Committee being nominated and put in place with.

A first meeting was in 2019, to establish the updated committee as some of the previous committees had moved on.

SITAS 2022 Calendar is being developed with key sport cluster days each term and the annual Tertiary Games in December, and any recognized institutions are welcome to become a member including Rural Training Centres (RTC).

Its executive formal representation is to forward needs, requirements, concerns and wishes of its member bodies to national and international institutes, with guidelines of International University Sports Federation – FISU and that will also acquire assistance from SINIS for tertiary sport development towards Pacific Games 2023 and beyond.