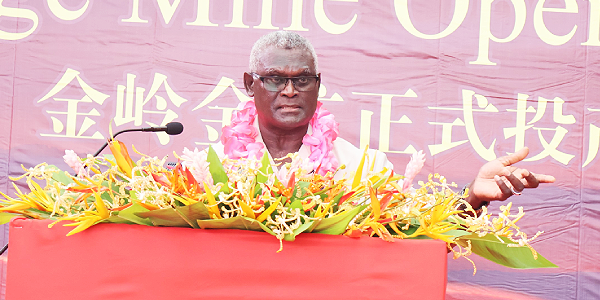 Prime Minister Manasseh Sogavare has commended the reopening of the Gold Ridge Mine in Central Guadalcanal on Tuesday, saying the mine is vital for the country’s economic recovery.

Speaking at the ceremony amidst hundreds of dignitaries including senior Government Ministers and Officials, Company representatives and tribal landowning group representatives at the mine site, Sogavare expressed optimism that gold export from the mining operation will bring much needed revenue for the country.

Sogavare highlighted that the redevelopment phase of the mine during the last three difficult years has already made significant transformations into local human resources, notably, in employment and training opportunities including vital technological information transfer.

The Prime Minister further commended the company for its commitment to community obligations that resulted in improvements to infrastructures including roads, bridges, schools and health clinics surrounding the mining area.

“That in itself is an investment in our human resources. I must acknowledge the contribution that the Gold Ridge Mining Limited has done in improving infrastructures such as, roads, bridges, schools and clinics,” Sogavare said.

The Prime Minister said reopening the mine is one of the flagship policy intentions of successive governments since the closure of the mine in 2014.

However, with dedication and much hard work by the Government-endorsed Cabinet sub-committee on Gold Ridge, stakeholders and the current investor overcame the challenges encountered, including the cancellation of the previous mining lease.

In Economic projection terms, according to 2018 FS, Gold Ridge epithermal gold deposit is estimated to contain 1.434 million ounces of gold. The new method used, enables concentrated production. This utilizes low-grade deposit unlike in previous operations. The benefit is that there will be more gold pour out of this new mining method.

Up to now, GRML has received more than $90 million in exemptions and under the Tax Memorandum of Understanding signed in 13 July 2021; it will continue to receive exemptions on the list of items under that MoU.

Sogavare further highlighted that political stability in the government is vital for the timely delivery of major investments and projects in the country.

“I must thank all ministers and Members of Parliament in the Democratic Coalition Government for Advancement for your support, unity and commitment to our beloved country. Let us continue to provide political stability to instil confidence in our investors. We must all work together for a better, safe and secure future for our children and country,” Sogavare said.

He called on all parties involved in the project including GRML, the government and landowners to keep working together even in the face of disagreements.