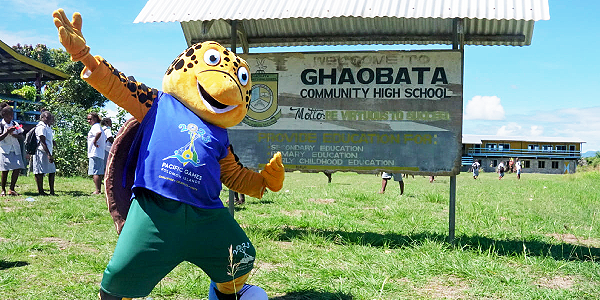 In total 10 villages, schools and communities were visited in Ghaobata ward.

Solo started its six – day tour of the ward on Saturday 13th August, 2022 in Navola and Vasakiki communities, before moving on to Koli (Sunday 14th August).

Solo and the team on Monday 15th August visited Tumurora and Ghaobata Primary schools and then ending the day at GIPPOL 2 community.

The tour continued with a Nguvia Community School on Tuesday, and then to Tenavatu and Good Shepard communities on Wednesday 17th August.

“Solo is truly becoming a fan favourite among the children in the communities we visited here in Ghaobata,” NHA Media Officer, Gino Oti, who has covered all of Solo’s tours this month said.

He added that Solo and the team were deeply overwhelmed by the hospitality and welcome received from villages, communities and schools.

“The welcome and the hospitality we’ve received from everyone here since arriving here has been overwhelming – we’ve even had a pig killed in Solo’s honour.

“Solo and the team – we are indeed grateful to the Ghaobata people,” he said.

Meanwhile Solo will wrap up its Ghaobata tour in Ngalimbiu today before returning to Honiara.