SPO is suing for articles about its in-house entity 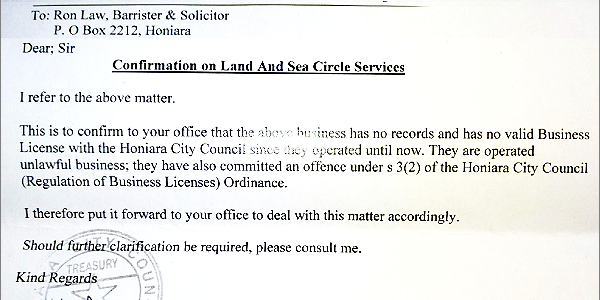 Riley Mesepitu is the Chairman of SPO. He is also the Permanent Secretary of the Ministry of Commerce, Industries, Labour and Immigration – a position which could attract the attention of the Leadership Code Commission (LCC) for potential conflict of interest.

Mr Mesepitu is demanding an apology for the two articles on behalf of Land and Sea Circle Services in his letter dated 12th November 2021. The letter was delivered at the Solomon Star head office at Lunga on Tuesday afternoon.

Oddly, the letter was not written by the Company’s lawyer – a departure from normal practice.

According to the one-page letter, the first article titled, Serious Allegations Trigger Internal Witch hunt at SPOL, appeared on 26th October 2021 and the second, titled Looming Disaster: SPOL Oil Undersea Pipeline “not safe” due to lack of maintenance, Expert warns which appeared on 31st October 2021.

“Our Board (has) perused these articles and with legal advice believe that the Articles contained defamatory statements that damage the image and reputation of South Pacific Oil Ltd as a Company as well as the image and reputation of the following Company officials – Mr. Carson Korowa, Chief Executive Officer, Mrs. Miriam Poznanski, Terminal Operations Manageress and Mr. Kunal Nandan, Chief Financial Officer.

Mr. Mesepitu warned that if the demand is not met the Company and its officials would “consider other options available to them, to assert their rights in law.”

A spokesman for Solomon Star said the newspaper is standing by the articles it had published about Land and Sea Circle Services.

“He also needs to disclose how many employees work for Land and Sea Circle Services, whether that company is paying Solomon Islands National Provident Fund contributions on behalf of its employees and other statutory charges such as PAYE withholding tax.

“Mr. Mesepitu should resign to protect his own integrity as at present he allows himself to be in a compromising position.”