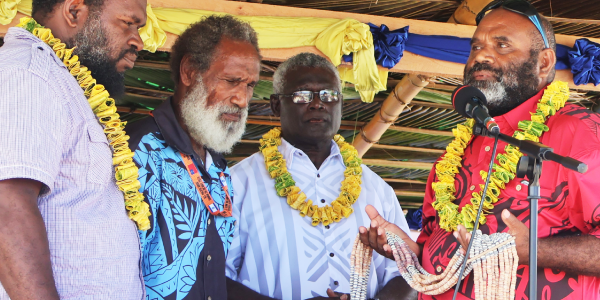 THE National Government has set aside its differences with the Malaita Provincial Government by signing with the provincial government to allow work on Suafa Economic Growth Centre to proceed.

The signing and ground breaking ceremony was conducted between the National Government, Malaita Provincial Government and Kwanai Trust Board when Prime Minister Manasseh Sogavare and his delegated visited Suafa Bay on Tuesday.

Mr Sogavare said the $3m market house project will benefit rural communities around Suafa Bay which has a population of around 26,000.

“The ground breaking ceremony today officiates with an investment of three million dollars to construct a new market which will directly benefit our rural communities with a population of 25, 955 residing along the northern region hinterland and coastal geographical locations,” Mr Sogavare said during the visit.

The Suafa Economic Growth Centre has been lying idle for the last 12 years since the signing of a Memorandum of Understanding on 7th June 2010 to conduct assessment, survey and valuation on the demarcated area at Kwatonaere for development of the economic growth center.

A purchase agreement for the said project was signed on 20th December 2011 where a 5.8 million transaction was done for the 10.6 hectares of coastal land.

Mr Sogavare said DCGA recognized the Market Building Infrastructure as an important component of the Economic Growth Centre to encourage the growth of economic activities in the Northern Region.

Once complete, the people of North Malaita will have a designated public space which will include stalls for rural market vendors.

The National Government also hoped that the Economic Growth Centre will provide employment, trade and investment opportunities which are the catalyst for positive industrial and commercial growth to benefit Malaita Province and the Solomon Islands.

He said Tuesday’s ground breaking ceremony attests to a new era in history to move forward in partnership and unity between the National Government, Malaita Provincial government and the landowning groups.

This partnership will unlock the development gateway into Malaita’s Northern region corridor.

“Let us from here onwards, stand firm with our strong vision to work together for the better development of current and future generations,” the Prime Minister said.

Mr Sogavare also assured the people of North Malaita that through peace, unity, love and kindness, the national government, provincial government and rural people will thrive together to develop Malaita.