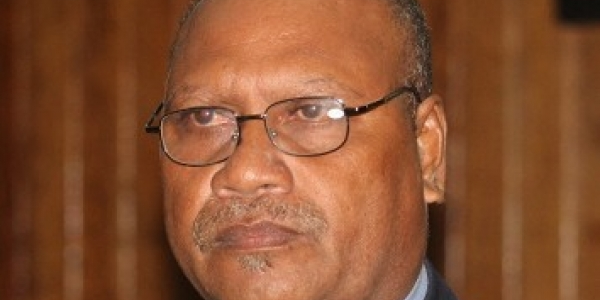 THE Malaita Provincial Premier Daniel Suidani says he is not the one who arranged the reconciliation ceremony held at Bethel community in East Fataleka, in Malaita Province recently.

Premier Suidani said he is just a guest at the event and not the organizer.

The Malaita Premier has responded to yet another desperate attempt by Israel Siau to try to tarnish his reputation with less significant or nonissues.

Mr Siau lately accused the Premier for not letting the Onilafa Parish know about his visit to the reconciliation ceremony at Bethel.

He also called for Anglican Church to discipline three priests who accompanied Premier Suidani to the Bethel reconciliation.

Responding to this, Premier Suidani said Mr Siau is barking at a wrong tree as he is not the organizer of the event.

The Premier questioned since when did Mr Siau became the spokesperson for Onilafa Parish.

He said it is funny that Mr Siau was allowed to speak on behalf of the Onilafa Parish.

He said calling on Anglican Church to discipline three priests who accompanied him to Bethel for the reconciliation ceremony clearly shows how insignificant the person (Siau) is, in understanding the significant roles that priests played in reconciliation to maintain peace and harmony at the community level.

Responding to the allegation that the Premier promised payment to those who provide security for the M4DD President Knoxly Atu, he said the Province is not paying any salary to anyone that is not an employee of the province.

He said Mr Atu is a free man and he does not need security as claimed by Siau in his attempt to feed the public with misinformation.

With the level of misinformation coming from Mr Siau lately, the Premier is now questioning if Siau is in his right mind or suffering from a mental disorder where he said someone in his right mind would not have such confidence to lie to the public.

Meanwhile, the M4DD President Mr Atu confirmed to this paper that he was the one who arranged the reconciliation ceremony after a police shootout at Bethel community.

He said the reconciliation is a way forward for Fataleka in preparing them for future development.

Atu said he sent an open invitation for any Fataleka man who had grievances against his community to attend where he said those with a heart for unity did attend the event.

He said the Malaita Premier responded positively to the open invitation which his community is thankful for where he said the reason why Mr Siau and others did not attend is a non-issue.

The M4DD President also denied wild allegations made by Mr Siau that Premier Suidani promised to pay his security with $5,000 each.

In fact, the M4DD President said there was no promise from the Premier, and stated that he said he has no bodyguard or security as alluded to by Mr.Siau.