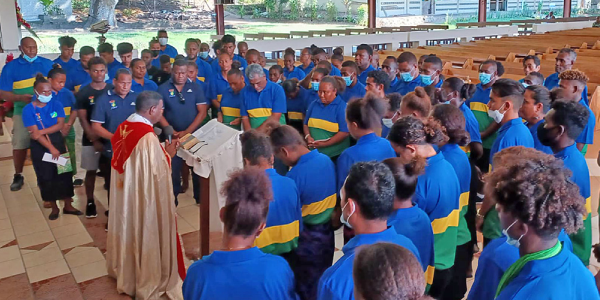 Team Solomon is ready; we are ready to go and represent the nation during the Mini Games in Saipan.

These were the words affirmed by the President of the National Olympic Committee of Solomon Islands (NOCSI), Mr. Martin Rara during the formal commissioning service of Team Solomon, at St. Barnabas Cathedral in Honiara, on Sunday 12th June 2022.

“Our commissioning today means that we are being sent with the glory of God descending over the team” Rara expressed.

“A powerful player is also amongst the team today as we prepare to travel, and that is Jesus, our God himself; so, let us take on this responsibility of representing our country in the games with honor”, he added.

The Solomon Islands Government (SIG) is sending a total of 122 athletes and officials to the 2022 Pacific Mini Games in Saipan, Northern Marianas.

The event which will take place from the 17th to the 25th of June will feature nine sports, all of which Team Solomon will participate in. The sports are athletics, badminton, baseball, beach volleyball, golf, tennis, triathlon, va’a, and weightlifting.

She reiterated earlier statements made by NOCSI President and added that the challenge now is to raise the Solomon Islands flag even higher during the games.

“We are commissioned today with the responsibility of formally representing our country and therefore we must go there and perform to the very best of our ability” Mrs. Ghemu highlighted.

“We must raise the national flag high during the games and take up this challenge, with pride and honor”, she added.

CDM Ghemu also took the opportunity to acknowledge the support of the Solomon Islands government, NOCSI, the 2023 Games Organizing Committee (GOC), the National Hosting Authority (NHA), and the Solomon Islands National Institute of Sports (SINIS) for preparing the athletes in the lead up to the mini-games. She also acknowledged the 9 federations for their commitment to preparing their respective athletes and thanked all families for their support towards Team Solomon.

Team Solomon is scheduled to depart on the morning of Tuesday 14th June 2022.